by
Jo A. Hiestand


One dark night artist Craig Saxton went missing from his village.  His body was found thirty-two hours later in the river, floating like a bobber on a fishing line. Rumors swell like tidal waves: did his ex-wife or his fiancée’s father kill this likeable young man? Or was it simply a case of jealousy by the village’s other artist? Now, two years later, Craig’s fiancée hopes ex-police detective Michael McLaren can find out. From speaking to villagers, McLaren quickly realizes that what appears to be a straightforward investigation is fast becoming as tangled as fishing lines. Are the fish poaching incidents, the reappearance of the local ghost, and assaults on him merely to muddy the investigative waters, or are they connected to Craig’s death? McLaren has his hands full. They become even fuller when a nemesis from his past appears one night, bent on revenge. And the inevitable struggle opens a new future for one man…and leaves the other empty handed.

EXCERPT
They settled at a table they considered theirs. It was in a corner, diagonal to the pub’s front door. Sitting with the wall behind them and their faces to the door was a habit McLaren kept from his days as a working detective. And it was one habit he was in no rush to break.


Jamie set his glass mug on a cardboard beer mat and leaned forward slightly. The reddish streaks in his otherwise brown hair shone under the overhead light. “Congrats on solving the murder of your uncle’s first fiancée, by the way. Do you like his new bride? What’s her name?”


“Karen. And yes, I like her. I wasn’t too sure when I first met her, but she has a lot of inner strength. She’s good for him.”


“That’s not far. Near Hartington, isn’t it? On the River Dove?”


“Yeah. Small place. And it sounds like an odd case. The woman, Victoria Childs, doesn’t know who else to turn to for help.”


“So, she turns to you.” Jamie smiled, his eyebrow raised. “She’s made a brilliant choice.”


McLaren let the comment pass unanswered. “She wants me to find the killer of her fiancé. His name’s Craig Saxton. He was an artist, quite prominent in the local area, though you couldn’t swear it by me.”


“You frequent art galleries only when your sister has something to exhibit.”


McLaren nodded, his fingers sliding down the sides of his glass. “Anyway, this Craig Saxton had been missing for one and a half days. His body was found against the sluice gate in the river.”


McLaren snorted at the understatement. “He was also missing his right hand.” 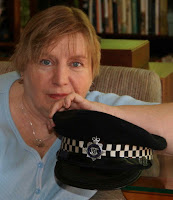 A month-long trip to England during her college years introduced Jo to the joys of Things British.  Since then, she has been lured back nearly a dozen times, and lived there during her professional folk singing stint.  This intimate knowledge of Britain forms the backbone of both the Peak District mysteries and the McLaren cold case mystery series.


Jo’s insistence for accuracy, from police methods and location layout to the general feel of the area, has driven her innumerable times to Derbyshire for research.  These explorations and conferences with police friends provide the detail filling the books.


In 1999 Jo returned to Webster University to major in English.  She graduated in 2001 with a BA degree and departmental honors.