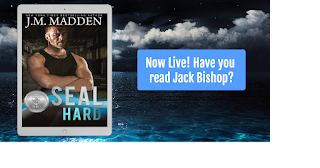 Note from ELF: I read the beginning of this story at AMZ and was captivated!

Former Navy SEAL Commander Jack Bishop thought he was done with the government shenanigans that cost him part of his mobility. So when he’s presented with a new case thanks to the Bone Frog division of the Department of Homeland Security, he’s less than enthused, until he learns that Navy SEAL families are in danger. But there’s a more personal connection. Somehow his best-friend’s widow is involved and no matter how hard he has to fight his need for her, he has to be there to help her out. He has no desire to rejoin any part of the government, but there are lives at risk, as well as a personal connection he can’t ignore
.
Andrea Winters knows that something hinky is going on in her high traffic coffee shop. As a former Navy SEAL wife, she knows something feels off. She reports her feelings to a man she thinks she can trust, and suddenly she’s running for her life. Is there a conspiracy afoot? Or is she just overreacting to a strange set of circumstances? Things begin to turn around when Jack Bishop returns, looking even more handsome than he did years before. In spite of his scarred, inscrutable exterior, she still sees glimmers of the man she thought at one time would help her rebuild her life after her husband—his best friend— was killed.

Will he help her understand what’s going on now? Or just confuse her further with his hungry looks and even more demanding hands… more importantly, will he stay this time?
They’re in a race against time to save lives, and possibly hearts…


Jack refused to think about the ramifications of holding Andrea in his arms. He couldn't. And he refused to acknowledge she smelled of sultry nights and things he hadn’t had for a very long time. Things that made his body respond in a very inappropriate way. Shifting off the couch, he carried her to the master bedroom. The room that she had shared with Dorian, his best friend. Doing some maneuvering, he managed to brace her on his knee and pulled the blankets down, then he settled her to the mattress. Pulling the covers up over top of her, he met her eyes. "We’re both fried," he told her. “You need to sleep.”


Andrea blinked, her lids already sagging. He started to turn away but she grabbed his left hand, the mangled one with only three fingers. “Thank you, Jack. I knew you were the one I needed to call."


Her eyes closed completely and she sighed out a breath. Jack stared at her for a long moment, tracing the lines of her face. She’d cut her hair again. The golden brown strands were almost boyishly short, but it just seemed to make her that much more delicate. Andrea had always been the strongest woman he’d ever known. Her tears tonight didn’t change that fact.


He had long ago realized that that innate strength was part of what drew him to her. Men liked to believe that they were stronger sex but he thought the exact opposite. After watching her put herself through school, raise two kids, deal with a husband that was deployed more often than not, Andrea had still managed to build a life for their family, a real home. And that family, again more often than not, included him.


It had been a couple of years after he met her that he realized he had feelings for Andrea. Not that he would never do anything about them. Dorian was his brother and he would never betray him. But the feelings for her were difficult to deal with. He'd never been in love before so struggling with the need she roused in him was challenging, a constant tug of war, and that internal fight had actually led to his first panic attack. It had been at a backyard gathering, just one of those just hang out and unwind days, but his tension began to increase rather than decrease. Maybe it was seeing the way she doted on Dorian, after he’d been gone for the past two months. At the time he’d thought he was having a heart attack. It hadn’t eased until Andrea had knelt down beside him, looked into his eyes and started talking to him about normal, everyday family things like the weird sound the car was making and a teacher the kids were having a problem with at school. She’d made Jack feel like he mattered, like he was part of the family too. For years, decades, he'd yearned to have her in his arms for him, not for any other reason. Not because she was just glad to see Dorian’s friend, and not because she needed a handy man, or a shoulder to cry on, but because she saw and wanted him.