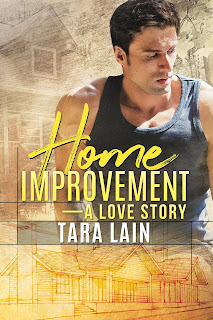 Romance on Aisle Sixteen—opposites attract amid the hammers and screws of the home improvement store.

Gabe Mason became a father at seventeen, and his daughter, Ellie, is the most important thing in his life. But being the parent the courts demand means Gabe has given up most of his dreams—education, making furniture, a gay social life—to be a model dad with a steady, reliable job in a home improvement store. Life’s predictable until Jerry, a shy, eccentric guy in a hat and sunglasses, begs Gabe to oversee the renovation of his run-down mansion.

Gabe loves the house and the work, and Jerry's pretty lovable too, but when Gabe discovers Jerry’s secret identity, he fears their passion could overturn both their lives forever.

Jerry pretty much smiled all the way through the unloading, which was damned hard and took an hour of trying to maneuver the huge pieces of furniture across the lawn and up the stairs to the nearest door. Once inside, they placed the credenza at one end of the dining room that looked over the pool. The gleaming wood of the cabinet glowed against the Saltillo tile floors and gave the room—which still needed paint, rugs, and a table—some promise.


When they’d wrangled the coffee table into place in the middle of the huge great room, Gabe laughed. “I guess we can call it a start.”


Jerry threw his arms out and spun. “But it’s sooooo beautiful.” He kept swooping and twirling around the room until his head spun and the floor of the room and the wood ceiling far above kind of blended together. He threw his head back and laughed, his foot hit one of the rough places on the tile, and he staggered. “Whoa!” He slid and teetered toward the floor.


Before he could hit, Gabe snatched him into a full-body grab. “Hang on.”


Jerry took him at his word. Wrapping his arms tightly around Gabe’s neck, he hung on like crazy. Truthfully, he was too dizzy to stand up—


—and the Captain America arms didn’t help that dizziness one bit.


Before he could really analyze his situation, he’d pressed himself full length against Gabe’s tall, sturdy body, laughing tipsily.


Yes, the contact was pretty wriggly, and if he’d asked himself a hundred times whether Gabe might, just might, like guys since he seemed to look at Jerry like an hors d’oeuvre sometimes, he now got his answer. One formidable protuberance rose in the middle of the embrace and seemed to be matched in his own pants. Gabe’s heartbeat pounded against Jerry’s chest.


Oh fuck! Just one taste. Jerry slid the arm that was tightly wrapped around Gabe’s neck up a couple inches and yanked Gabe’s head down so he could lock their lips together.


The first touch produced an electric spark that slammed straight to Jerry’s balls so hard, for a second he had to hold his breath to keep from embarrassing himself with wet sweats. As the first gasp came under control, a tsunami of heat washed through him, and he slid his fingers tightly into Gabe’s shaggy, silken hair, as he pressed closer from lips to hips.


Gabe had been holding Jerry around the waist. His strong hands slid down and grasped Jerry’s butt and squeezed. Jerry gasped at the amazing pressure, and everything in him wanted to climb Gabe like a tree and then plant that evergreen where it would do the most good.


Before Jerry could anchor a leg around Gabe’s hips, he was gone, and Jerry was staggering backward to keep from falling.


Gabe gasped, “Oh God, I’m sorry. I’m so sorry. I hope you enjoy the furniture. Let me know if you change your mind about the other pieces. Otherwise I’ll make sure they get here while you’re gone.” With that he turned, hurried from the house, and before Jerry even made it to the front door, had disappeared out of sight.


Jerry slammed the front door, leaned against it, then slowly collapsed to the floor. Fuck-a-doodle-doo. Good job, asshole. Find somebody you actually like and enjoy being around and screw it up by being you.


He dropped his head onto his bent knees.