The Gift
by
Tegon Maus

Tucker Littlefield is a liar, a thief, a con-man. In an attempt to take advantage of a party thrown by the King, he becomes involved in a kidnapping – the King’s niece, Elizabeth, to be exact. Because of his fear of the dark as well as heights, and a good many other things, he finds himself stabbed and bleeding to death. To save him, a Shaman for the Jonda – Daneba – turns him into a soul bearer for the Kindred. In an effort to find Lizie, Littlefield finds the Norha instead and their leader Tahki - a cannibalistic tribe the lives under a volcano that will leave no stone unturned to find Lizie. Littlefield is blackmailed into her recovery. Will the help of his companion, Enon, help them save Lizie...and themselves?

"Transformed by a primitive magic beyond a civilized man's understanding, I was given a horrible gift that no man should possess... It held me, twisted me, turning me at its bidding. I was enslaved by its power, compelled to devour the souls of the dead until I became the monster of my fears. I have seen things I wish never to see again. I have done things of which I wish never to speak. Yet I must if I am to find the answers to fulfill my hope. I have walked upon blue ribbons of molten stone to peer into the depth of a man's soul. I watched as a promise made at birth brought my friend Enon to sacrifice everything to become whole again - all in an effort to save the life of his child. I have cried without shame for the loss of all I hold dear and for fear that the future will hold more than I can bear. I am Tucker Littlefield. Know all that I say now is true-spoken."

She grabbed my right hand, holding it tightly. I was frozen with fear and could not escape. The dagger suddenly flashed in her hand and she drove it deep into my palm. I wanted to scream, but nothing came out of my mouth. If it did, it was drowned out by the wails of Enon’s dog. It howled, pained as deeply as I, as the flames of the fires became fingers, rippling out to tear open the dog’s chest. They responded to Daneba’s voice, doing her bidding, and peeled layers of flesh, laying open bone and hide alike, exposing the animal’s beating heart.

A second unholy scream filled the air, deeper, wilder than that of the creature laid open at my side. It was Enon, and all that had happened to the dog began to repeat itself with him.

He, still kneeling, screamed as his chest turned inside out, his beating heart exposed to my gaze.

I was next to be disemboweled by her spell. The tearing of cloth and the sizzle of the fire as it pulled open my skin was deafening. The snap of bone wrenched at my fear and as I looked down, there beat my own heart. Blood ran freely from the hole in Enon’s hand. Daneba’s chant gained volume as she collected it in a silver bowl and the wind blew harder. As she chanted and the fire licked out repeatedly toward me, she poured Enon’s blood into the fresh wound in my palm and between my fingers. She raised the bowl higher and the blood that streamed from it thinned to a single strand. 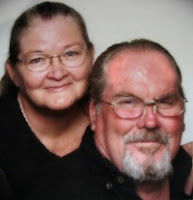 I was raised pretty much the same as everyone else... devoted mother, strict father and all the imaginary friends I could conjure.

The first thing I can remember writing was for my wife. For the life of me I can't remember what it was about... something about dust bunnies under the bed and monsters in my closet. It must have been pretty good because she married me shortly after that. I spent a good number of years chasing other dreams before I got back to writing.

It wasn't a deliberate conscious thought it was more of a stepping stone. It was the eighties, my wife and I had joined a dream interpret group and we were encouraged to write down our dreams as they occurred. "Be as detailed as you can," we were told.

I was thrilled. If there is one thing I enjoy it's making people believe me and I like to exaggerate. Not a big exaggeration or an outright lie mine you, just a little step out of sync, just enough so you couldn't be sure if it were true or not. When I write, I always write with the effort of "it could happen quirkiness" very much in mind and nothing, I guarantee you, nothing makes me happier.