I have the pleasure of sharing a guest post by author Morgan Brice/Gail Z. Martin, who talks about...

Sand and sun make for a great beach vacation. If you’re a beach fan, you’ve probably noticed that each beach has its own vibe.

I spent a lot of time at Myrtle Beach in South Carolina and at Virginia Beach in Virginia, and while they’re both great places with fantastic boardwalks and lots of things to do, they don’t feel at all alike. Virginia Beach is near military bases, so the beach is full of muscular, ripped twenty-somethings, and the town has more than its share of places to get a drink, a tattoo and an exotic dance. Myrtle Beach draws a Spring Break crowd and has its famous motorcycle rallies, but otherwise it’s very much a family beach, filled with kids, guys with dad bods and moms who look like moms.

So when I had the opportunity to go to Cape May, New Jersey, I wasn’t sure what to expect. It’s not far from Wildwood, but it’s posher by far than the stereotype for the Jersey Shore. In fact, the hotel which inspired the fictional, cursed, hotel in Treasure Trail was built to lure the parasol and top hat crowd away from Newport and Marblehead back at the turn of the last century.

Cape May has great beaches, lovely beach cabanas, and amazing food. Beautiful Victorian houses face the ocean, and there’s a lighthouse at the far end of town. It’s more polo shirt and khakis than tank top and board shorts, the place for people who want to kick back without letting it all hang out.

The perfect place for Erik and Ben, the main characters in Treasure Trail, the first in a new series set in Cape May! Erik Mitchell used to track art fraud and bust up forgery rings, but after a close call, he moves to Cape May to make a fresh start. Ex-cop Ben Nolan is also starting over, and sparks fly when the two men meet. But when old scandals and murders come to light, they’re going to need each other and every bit of luck to get their happy ending.

A cursed hotel, a missing clock, and an old skeleton add up to trouble for Erik and Ben. As they’re navigating a new town, a budding relationship and the scars of old betrayals, they’ve got to decide who to trust, because someone wants to turn Erik and Ben into Cape May’s newest ghosts!

If you’ve read my Badlands and Witchbane books, you’ll spot some familiar names, since all my series have cross-overs and cameo appearances. The same is true for characters from the non-romance urban fantasy I write as Gail Z. Martin. That makes for a spooktacular expanded universe! 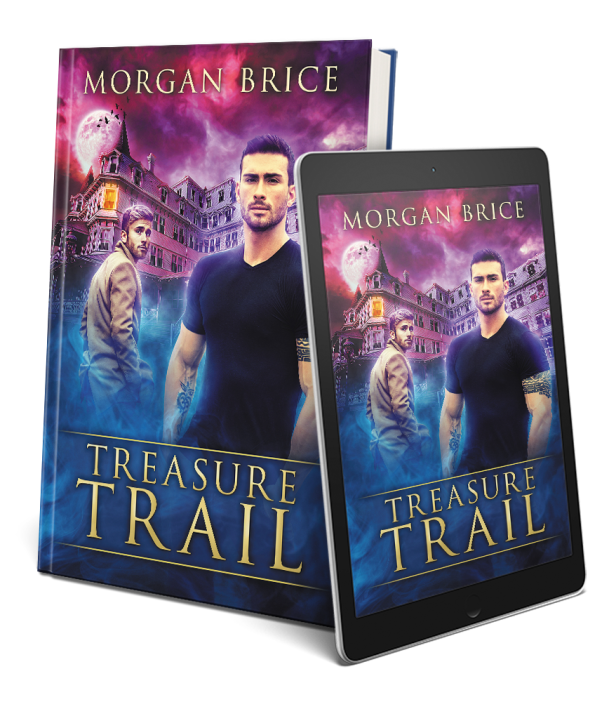 Themes: Taking a chance on love, running from your past, trust, friendship, found family

When a missing antique shows up under mysterious circumstances, Ben and Erik are plunged into danger as a cursed hotel’s long-ago scandals resurface. Someone wants those secrets to stay buried—and is willing to add Ben and Erik to the death toll to keep the past hidden.

Erik Mitchell traveled the world uncovering art fraud and relic theft, which pitted him against spoiled billionaires, unscrupulous collectors, mobsters and cartels. He worked with law enforcement across the US and Europe, but a sting goes wrong and Erik ends up injured, then returns to find his partner cheating. Erik decides to stop globe trotting and buy an antique shop in scenic Cape May, NJ, rebuild his life, and nurse his broken heart.

Undercover Newark cop Ben Nolan went down in a hail of bullets when a bust went sideways, after a tip-off from a traitor inside the department. After he recovers, he spends a couple of years as a private investigator, only to tire of seeing the worst of human nature. So when his aunt offers him the chance to take over her rental real estate business in Cape May, it seems too good to be true. Now if he could just believe he could ever be lucky again in love.

When a missing antique shows up under mysterious circumstances, Ben and Erik are plunged into danger as a cursed hotel’s long-ago scandals resurface. Someone wants those secrets to stay buried—and is willing to add Ben and Erik to the death toll to keep the past hidden.

“What the hell did you pack in these boxes? Rocks?” Sean Meirlach shifted the heavy moving box on his shoulder. Sean looked and sounded like the Jersey Shore guy he was, brawny and blunt.

“Books,” Ben replied. “You know, those rectangular paper things? Ever read one?” The teasing was good-natured. Ben Nolan had spent most of his summers working for his cousin’s mom, and they were thick as thieves. Which, Ben reflected, was a poor analogy for an ex-cop-turned-former-private-investigator. And now, at least for this summer, a vacation rental manager in beautiful Cape May, New Jersey.

“Yes, dumbass. I’ve read lots of books. And not just the ones with pictures in them,” Sean said with a smirk. Sean played up his bad boy persona, but Ben knew his cousin had plenty of brains, hustle, and street smarts.

“Good to know. I’d hate to have to break it to Aunt Meg that her favorite son was illiterate.”

Sean snorted. “Favorite son? I’m her onlyson, asshole. And she’s already pissed at me because I just want to run my food truck in Wildwood. Which is why you’re doing me a huge solid, taking over the family business.”

“Whoa, there! Hold up. I’m here for the summer. Justthe summer. I said I’d see how it went. No promises.”

“Just the summer? You sure brought a lot of shit with you if it’s just for the summer.” Sean set the box down a little harder than necessary on a table in the upstairs apartment over the rental office, which would be Ben’s home for the next few months. Ben dumped the tangle of odds and ends he had carried up from the rented van and flopped onto the couch. He had put most of his things in storage when he left Newark and brought what he didn’t want to do without, or what the apartment didn’t have. Sean had driven the truck up to Cape May, while Ben drove his black Mustang, packed to the roof.

He owed Sean a lot for helping him move—and, if truth be told, for pushing him as the perfect candidate for the job to Aunt Meg.

“Don’t screw up the master plan, dude!” Sean chided. “You’re sick of the big city and getting shot. And I need a little of that good life, somewhere not quite as buttoned-down.” He reached for a bottle of water and took a swig. “I love this town, but I need to stretch my wings. And the vibe in Wildwood is different. People come for the Pier and the Boardwalk and the rides. More singles, not just families. And they all have to eat!”

Sean’s truck, Put A Ring On It, specialized in kickass onion rings, which went on everything—burgers, hot dogs, chicken wings, even chili. The combination of great food, a catchy name, and Sean’s outgoing personality had made for a very successful launch. 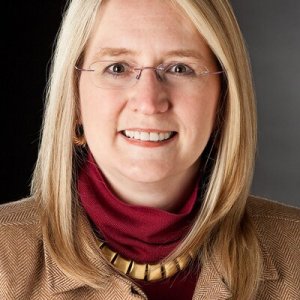 Morgan Brice is the romance pen name of bestselling author Gail Z. Martin. Morgan writes urban fantasy male/male paranormal romance, with plenty of action, adventure and supernatural thrills to go with the happily ever after. Gail writes epic fantasy and urban fantasy, and together with co-author hubby Larry N. Martin, steampunk and comedic horror, all of which have less romance, more explosions. Characters from her Gail books make frequent appearances in secondary roles in her Morgan books, and vice versa.

Other books include Witchbane, Burn, Dark Rivers, and Badlands. Watch for more in these series, plus new series coming soon!

Join my Worlds of Morgan Brice Facebook Group! Get the early scoop on upcoming books and new series, see new covers first, enjoy insider news and special contests and giveaways! Plus it’s where I get my beta readers and launch team!

Sign up for my newsletter and never miss a new release 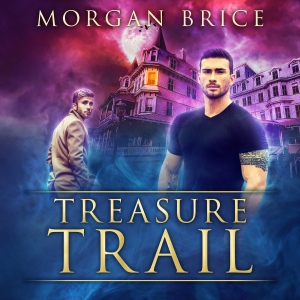 Enter the Rafflecopter Giveaway for a chance to win

your choice of ebook from Morgan's backlist and a $10 Amazon gift card.

➜ Sign up to become a tour host here 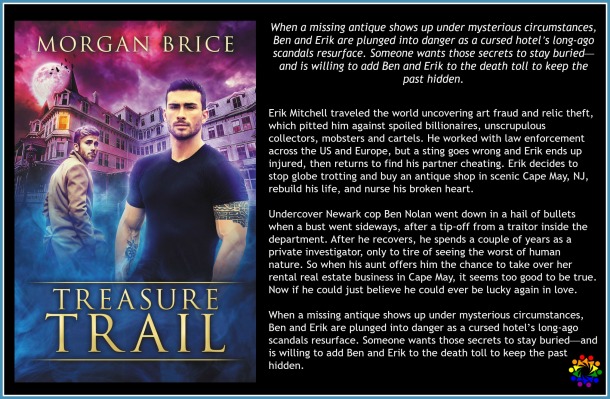 Treasure Trail by Morgan Brice introduces Erik Mitchell, who is the new owner of a unique antique shop, and Ben Nolan, who is temporarily managing his relatives’ real estate rental business. Each man has had experiences with the paranormal world, which means they’ll fit right in to their new town. However, neither expects to become embroiled in several cold cases that may be life-threatening to solve.

This adult gay paranormal mystery story is the first book in a new series and definitely starts things off with plenty of eerie elements to pique one’s interest. The small-town feel juxtaposed with the casual acceptance of ghosts and “other” is vividly depicted and convinced me that this is NOT somewhere I want to visit, lol. I love this author’s world-building and ability to create realistic, likable characters who accept their abilities with equanimity and a sense of responsibility.

I was drawn in to the story immediately and sympathetic to each of the main characters as their pasts are gradually revealed. I love that this is a mystery story with that unique twist of the paranormal (including ghosts demanding justice) that enhances the mystery and investigation. The tension mounts even as the two guys gradually accept their burgeoning relationship and reveal their respective painful pasts and dangerous past professions.

It was even better to have several cameos by folks from the other series penned by this prolific and talented author. I delight in the opportunity to get a glimpse of them and look forward to some of them getting their time in the spotlight again. Those in search of an exciting mystery story with a paranormal twist will enjoy this tale—but beware, once captivated, nothing else will get done!