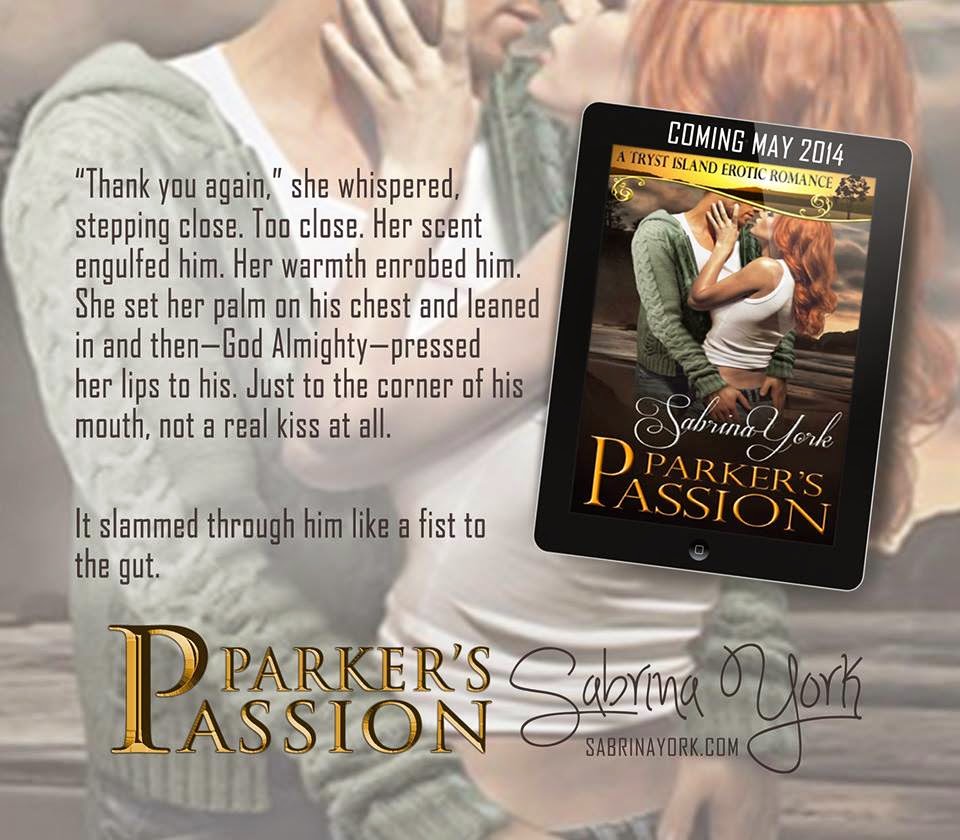 by Sabrina York is an ADULT title

Scarred by a long-ago crime of passion, Parker Rieth has dedicated himself to a cold, emotionless existence as a divorce lawyer. He is utterly unprepared for the effect Kaitlin Stringer has on his heart, mind and soul. Beautiful, ethereal and irresistible, she touches him in a way no other woman has. Though he has vowed to avoid her, he is drawn toward her.

Psychic healer Kaitlin is just what Parker needs to reconcile his past, to finally set old ghosts to rest, and to claim his destiny. Can he find the courage to step into Kaitlin’s embrace? Does she have what it takes to awaken his sleeping passion?

An Excerpt From: PARKER’S PASSION

“First aid kit?” she asked in a no nonsense voice.

“In the bathroom. Under the sink.” He nodded in that direction.
When she took off to find it, he carefully peeled back his shirt and frowned. The cut was nasty, but not too deep. He wouldn’t need stitches, but it would have to be wrapped and he’d probably need to go see Doctor Marks first thing on Monday. Maybe get a rabies shot or something.

A gasp from the doorway shot through him like a bullet. He yanked his shirt down but it was too late; he could tell by the expression on her face, she’d seen. “It’s not bad,” he said in a light voice.

She snorted and dumped gauze, peroxide, antiseptic and tape on the bed.

And then she dropped to her knees before him.

Holy Jesus God. She dropped to her knees before him. In his bedroom.

His mortification that she’d seen his scars was swept away by a devastating lust. He nearly lost consciousness. Despite the fact he was in pain, his cock rose.

What was it about this woman?

On her knees before him?

“It needs tending,” she said, ripping open a package of gauze and setting it aside. “Lift your shirt.”

In front of a woman?

A woman he wanted to—

“Lift. Your. Shirt.” Her tone brooked no refusal.

“Kaitlin…” He should warn her. She’d seen it, but maybe she hadn’t really seen it.

“Parker, I need to get some peroxide on it and quickly. Please. Lift your shirt.”

It had been a nice fantasy, while it lasted. Once she saw, she’d run screeching the other way. They all did. Or, if they didn’t screech, their noses would curl up and their faces would go all cold. And then they’d quietly run away.

Slowly, he pulled up the hem.

And hell. Yes. Her nose wrinkled.

But she didn’t run.

She touched him. She touched his scars—mottled and discolored and ugly—thumbing them gently. “Hmm,” she said, turning away to open the bottle of hydrogen peroxide and soaking the gauze with it. She met his gaze saying, “This will be cold,” before daubing it on his cut.

He flinched when she touched him.

Most of the nerves there were dead. The only place it burned was on the sides, where his scars weren’t quite so thick.

She gently dabbed at him, making sure to get the antiseptic over the whole cut. “I’m going to cover this, but I need to wrap it around your waist,” she said. “It will be easier if you take off your shirt.”

His belly was bad enough. But the rest of him?

She sent him a mocking pout. “Parker, let me help you. You helped me last night. It would be my honor to return the favor.”

God bless her. She was so damn sincere and genuine. How could he explain?

“I don’t like taking off my shirt,” he said. Well, that didn’t explain much. Then again, it explained everything. “These scars…” He waved to his exposed stomach. Hell he could barely stand to look at it himself. He hated the way he looked. Had since he was five.

He sucked in a breath, steeling his spine. “I have them…all over.”

She set her hand on his knee. Her jaw went slack. Her eyes glazed over. “Wow,” she said after a long moment. She cleared her throat.

“That must have hurt a lot.”

“Okay. Now take off your shirt.”

“Just do it, Parker. Let me wrap this up and then you can put your armor back on.” This she said gently, with no discernible derision. It was horrifying how she seemed to see right through to his soul.

Then again, it was comforting as well.

Which was probably why he did it…why he took the hem of his shirt in his hands and pulled it off. Exposing himself to another human—not in the medical profession—for the first time in years. 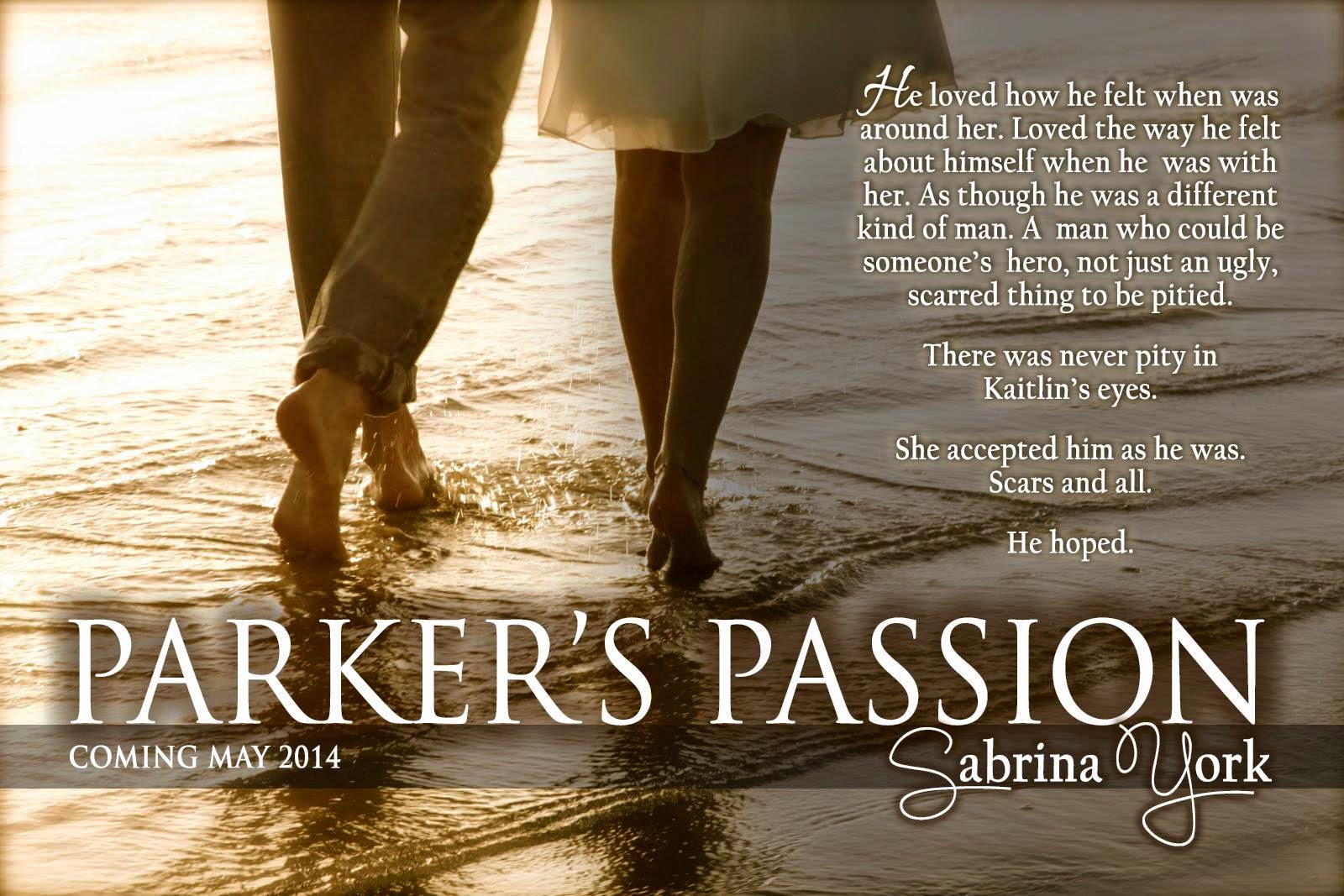 Fall in Love on Tryst Island
When a group of friends share a vacation house, wild hijinks, unexpected hook-ups and steamy sex ensue. And true love. Did I mention they all find true love?

If you’re new to the series, check out the Tryst Island Trailer or download Sabrina’s free teaser book to read blurbs and excerpts for this popular series. Each book in the series is a stand-alone story.

Dylan Deveney has no interest in a wild fling. He simply wants a quiet place where he can try to forget a painful past and, barring that, drink himself to death. But when he catches a glimpse of his exquisite neighbor—in the buff—his passion for life reignites.
Cassie French can’t resist Dylan’s allure. From his scruffy beard to his earring to his intriguing dragonfly tattoo, she’s crazy about him. And sex between them is scorching. Everything seems perfect…until a tragedy from Dylan’s past threatens to ruin everything.

Bella Cross has had a thing for Holt Lamm since college, but his scorching dominant energy scares her to death. And his list of conquests annoys her. But when Holt catches her smoking, and offers her something else to fixate on—if only for a night—she simply cannot resist.

When Emily Donahue sets eyes on Ash Bristol, she is convinced he’s the one she’d been waiting for, her Prince Charming. But wealthy playboy Ash Bristol’ has been burned. He’s sworn off relationships, vowing to have nothing more than a series of steamy one night stands. So when he meets Emily, the most beautiful woman he’s ever seen, he resolves to seduce her, possess her…and walk away.
The passion that ignites between them has him questioning his decision. He begins to suspect he just tossed away the best thing that’s ever happened to him…and vows to win her back.
Can he survive the erotic punishment she—and her friends— devise?

Devlin Fox has always been a player. A horny bee flitting from flower to flower. He has no idea why the sexy minx he meets on the way to Tryst Island affects him the way she does. Arousal—for her—hits him like a fist to the gut and he can’t stop thinking about her.
But Tara Romano doesn’t “do” commitments. For good reason. When she proposes they be “friends with benefits,” Devlin can’t figure out why the idea annoys him so much. It should be the perfect scenario. A gorgeous, alluring woman who only wants him for his body… He wants, needs, more from Tara, so he hits upon a plan to turn their no-strings-fling into something lasting. A series of tantalizing dares—dares Tara cannot resist.
Now Available on Amazon

Check out Sabrina’s books and read an excerpt on Amazon or wherever e-books are sold. Visit her webpage to check out her books, excerpts and contests.

Free Teaser Book
And don’t forget to enter to win the royal tiara!

by Sabrina York is part of the sensual ‘Tryst Island’ erotic contemporary romance series that centers around a group of close-knit friends and their weekend getaway house on Trystacumseh Island.  This story showcases Kaitlin Stringer who has mostly overcome the traumatic college experience in her past but who has continued to shun physical touch from everyone outside of her inner circle of friends, partly as a way to cope with her remarkable gift.  Parker Rieth is a successful divorce lawyer who has his own scars to deal with, both physically and emotionally, and doesn’t expect Kaitlin to turn his world upside down.  It is up to both of them to discover whether they can find healing with each other or are there too many obstacles from both past and present in the way?

This stirring novella combines both the sensual heat that readers have come to expect from this enjoyable series and the emotional depth that this author does such a great job of conveying.  Particularly enjoyable for me was the alternate view of events that have been depicted in other stories in this series, seen through the prism of the Kaitlin’s and Parker’s eyes.  The hope that is evoked as each of these main characters works beyond the life-changing events which have shaped them gives inspiration to anyone who has dealt with trauma in life.  There are quite a few very serious issues dealt with in this story which on the surface is a celebration of lust and life between apparently carefree people but each of them has multiple layers that both tie them to each other yet isolate them.  There is a bit of suspense mixed with the minefield that the two main characters are traversing and the challenge of dealing with the opinions of others around them is familiar to anyone who has friends and family meddling in their life.  A great addition to the series with delightful glimpses of other characters who hopefully will have their time in the spotlight as well.
Posted by ELF at 12:30 AM