Holidays and Historical Romances at Kensington (Spotlight and GIVEAWAY) TBT 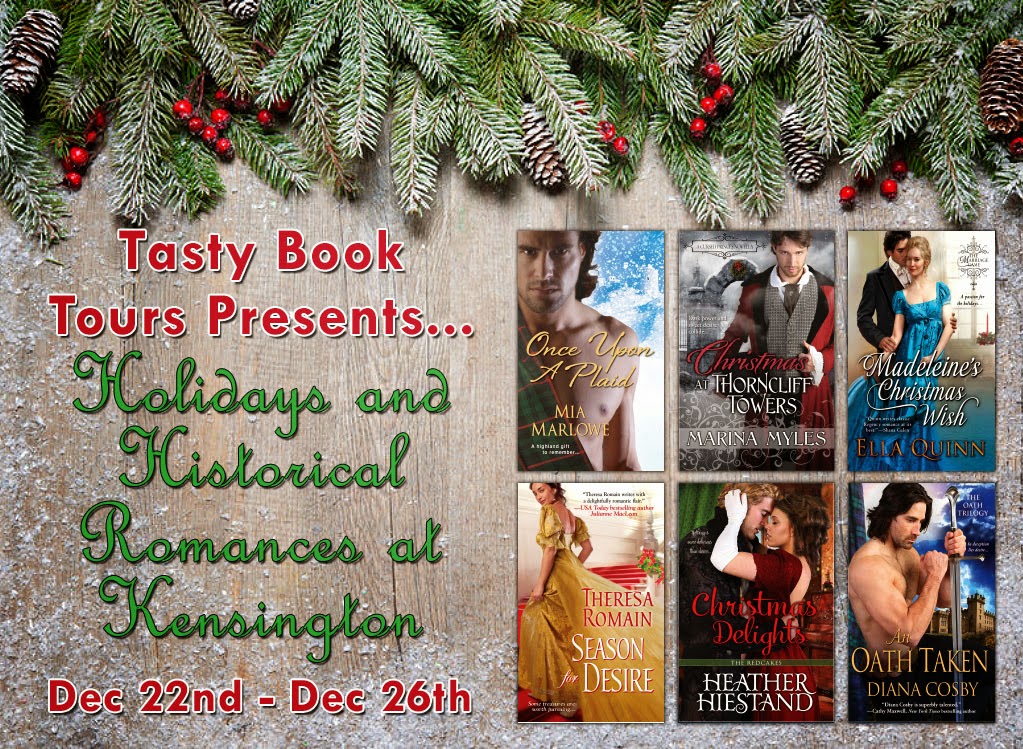 Like her four sisters, Lady Audrina Bradleigh is expected to marry a duke, lead fashion, and behave with propriety. Consequently, Audrina pursues mischief with gusto, attending scandalous parties and indulging in illicit affairs. But when an erstwhile lover threatens to ruin her reputation, Audrina has no choice but to find a respectable husband at once.

Who would guess that her search would lead her to Giles Rutherford, a blunt-spoken American on a treasure hunt of his own? When a Christmas snowstorm strands the pair at a country inn, more secrets are traded than gifts—along with kisses that require no mistletoe—and Audrina discovers even proper gentlemen have their wicked side…

Historical romance author Theresa Romain pursued an impractical education that allowed her to read everything she could get her hands on. She then worked for universities and libraries, where she got to read even more. Eventually she started writing, too. She lives with her family in the Midwest. Please visit her at http://theresaromain.com.

ONCE UPON A PLAID

A wife may be courted, too…

Many would count Katherine Douglas fortunate indeed. Laird William Douglas is broad-shouldered, gentle-handed, everything a lass could dream. But after four years of marriage, Katherine still knows little of what goes on in his heart. And she has yet to bear him an heir. The distance between them is too great—and so she flees over the snowy highlands to Glengarry Castle, home of her childhood, to set her husband free.

But William won’t let his wife slip away without a fight. Before long, he’s at her father’s threshold himself, witness to the rumbles of discontent in Glengarry, the bright joy of Yuletide at a family hearth, and the hidden needs of his own beloved…

Mia Marlowe learned much of what she knows about storytelling from singing. A classically trained soprano, she devised back stories to prepare for operatic roles. Since she’s worn a real corset, and had to sing high C’s in one, she empathizes with the trials of her fictional heroines. But in Mia’s stories, they don’t die in a Parisian garret. They get to live and keep the hero! Mia loves history, art, music and travel. Especially travel. Good thing, since she’s lived in 9 different states and is embarrassed to admit she’s lost track of how many times she’s been to Europe. She regards her frequent moves as vacations on which she drags along all her stuff. Currently, she and her DH make their home in New England.

The bachelors in Ella Quinn’s Marriage Game series make a habit of resisting the irresistible. But during the season for giving, surrendering to temptation may be the greatest gift of all…

A French spy, Georges, Marquis Cruzy-le-Châtel, has lived in England for years, sacrificing his life for his country—but not his heart. For he’s never been able to forget his childhood friend, Madeleine. And now, in her hour of need, he is there to rescue her…

The victim of a ruthless statesman, Madeleine, Comtesse du Beaune, has been abducted and sent to England to work in a brothel. Her greatest wish is to return home for Christmas, and her only hope of it is to marry Georges—though she will be his wife in name alone. Yet as they steal across the snowy countryside, Georges decides to woo her—with kisses that melt the winter’s frost and leave her longing for a holiday miracle…

Ella Quinn lived all over the United States, the Pacific, Canada, England and Europe before finally discovering the Caribbean. She lives in St. Thomas, Virgin Islands with her wonderful husband, three bossy cats and loveable great date. Fans can find out more at www.ellaquinnauthor.wordpress.com

A man of honor. A woman of spirit.

As the new castellan, Sir Nicholas Beringar has the daunting task of rebuilding Ravenmoor Castle on the Scottish border and gaining the trust of the locals—one of whom wastes no time in trying to rob him. Instead of punishing the boy, Nicholas decides to make him his squire. Little does he know the thieving young lad is really…a lady.

Lady Elizabet Armstrong had donned a disguise in an attempt to free her brother from Ravenmoor’s dungeons. Although intimidated by the confident Englishman with his well-honed muscles and beguiling eyes, she cannot refuse his offer.

Nicholas senses that his new squire is not what he seems. His gentle attempts to break through the boy’s defenses leave Elizabet powerless to stem the desire that engulfs her. And when the truth is exposed, she’ll have to trust in Nicholas’s honor to help her people—and to surrender to his touch…

Diana Cosby, a retired Navy Chief Petty Officer, owes her passion for writing to a gypsy childhood of living, traveling and experiencing various cultures throughout the world. An avid romance reader her entire life, it was an easy decision to begin writing after her career as a meteorologist. Diana is married to Bob, the hero of her life, a naval officer with over 22 years of service, including a tour in Iraq. She is blessed with three loving children: Eric, Stephanie and Christopher, and enjoys the company of her dog, Duncan Trevor MacGregor, and two cats, Bad and Brat. She’s a member of various romance writing organizations and presents writing workshops for her local writing chapters.

Thorncliff Towers is done up for Christmas, secure against wind and wolves. But Karina Petri is shut out, too, and the gypsy witch wants what’s inside. She envies the gifts, the feast, the pretty clothes, of course. But her true desire is for the love of Constantin Stoica. Her smolderingly handsome childhood friend agreed to serve Lord Draven after his brother was caught stealing last year. He suspects Karina was involved—and it would take more magic than she possesses to make him forgive…

Constantin has always been drawn to Karina’s dark curls, flashing eyes, and reckless ways. But trusting her has proven dangerous before, and this night holds more to fear than most. The wrong decisions could cost him his job, his safety—even his life. But letting Karina go could cost him his heart…

Although Marina Myles lives under the sunny skies of Arizona, she would reside in a historic manor house in foggy England if she had her way. Her love of books began as soon as she read her first fairy tale and eventually led to a degree in English Literature. Now, with her loyal Maltese close by, she relishes the hours she gets to escape into worlds filled with fiery—but not easily attained—love affairs. She’s busy being a wife, a mother, and a member of Romance Writers of America, but she is never too busy to hear from her amazing readers. Visit her at www.marinamyles.com.

The sweetest gift is the hardest to unwrap…

Lady Victoria Allen-Hill never dreamed she’d be a widow at twenty-one—let alone a virgin. Her father insists that she attend a matchmaking house party in the snow-covered seaside town of Pevensey in hopes she’ll find a suitable husband. But for Victoria, it’s an opportunity to indulge in a passionate affair—and the handsome inventor she meets at the Christmas Eve masquerade ball may be just the man for the job…

Lewis Noble is the cousin of London’s famed Redcake sisters, so it almost stands to reason that he’s just as irresistible as one of their sugar-iced pastries. Lewis catches the eye of every woman at the party—but Victoria is the only one who catches his. He won’t be tied down in her father’s business, but watching other men court her amid a flurry of engagements ignites a jealousy he’s never felt before. A dose of honesty may be just the thing to mend their broken hearts—for many holidays to come…

Heather Hiestand was born in Illinois but her family migrated west before she started school. Since then she has claimed Washington State as home, except for a few years in California. She wrote her first story at age seven and went on to major in creative writing at the University of Washington. Her first published fiction was a mystery short story, but since then it has been all about the many flavors of romance. Heather’s first published romance short story was set in the Victorian period and she continues to return, fascinated by the rapid changes of the nineteenth century. The author of many novels, novellas and short stories, she makes her home in a small town with her husband and son and supposedly works out of her tiny office, though she mostly writes in her easy chair in the living room.

a Rafflecopter giveaway
Posted by ELF at 12:30 AM