Romancing the Holidays at Kensington (6 book spotlight and GIVEAWAY) TBT 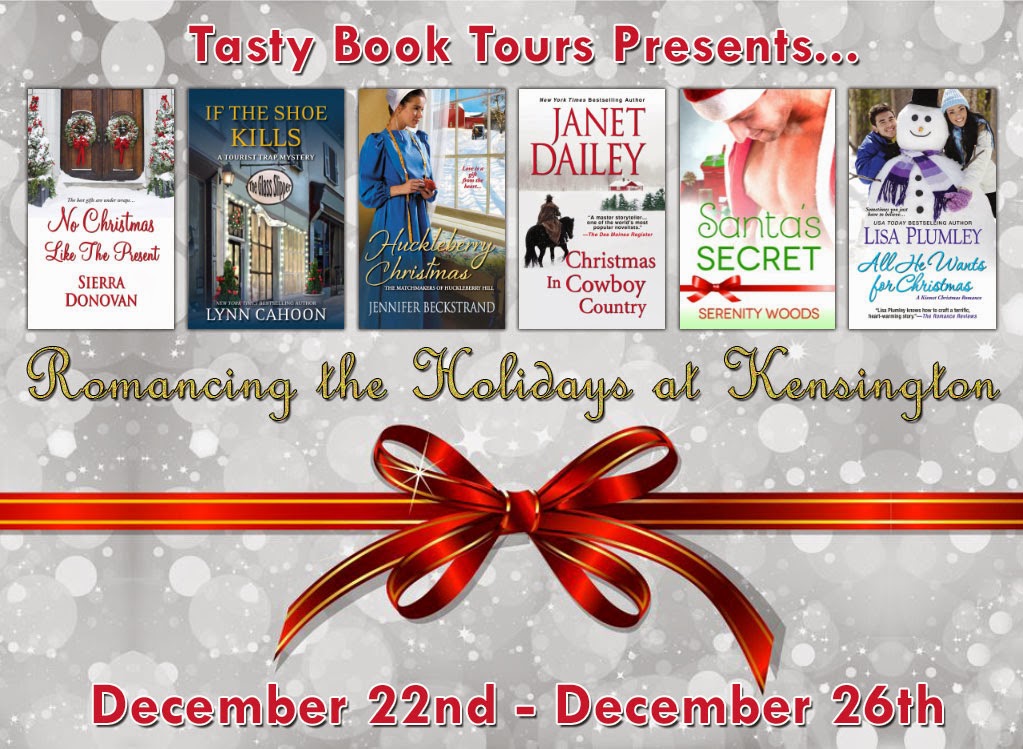 ALL HE WANTS FOR CHRISTMAS

Jason Hamilton is on thin ice with the board of his toy company. The young CEO may be a kid at heart, but his party boy reputation requires damage control. So Jason’s off to Kismet to inspect a model store, stay on Santa’s Nice list, and stick to business—no goofing around. Which is too bad, because the store manager, Danielle Sharpe, is the definition of what makes Naughty fun…

Danielle is thrilled to show off her thriving little toy store—especially if it’s her ticket out of Kismet. The single mom is tired of manufacturing cheer solo while her ex-husband has all the fun. But if she’d known Jason was this hot, she wouldn’t have offered to host him. With Jason in her house, Danielle is getting warmer than spiked cider. She’s supposed to impress him with her expertise, not daydream about catching him under the mistletoe. Now whatever she does, she can’t get swept up in the magic…

When she sat down to write her first book, LISA PLUMLEY expected the process to be easy. Three tries and several years later, she realized it’s not easy—but it is the most fun to be had outside of shoe shopping. Now the bestselling author of more than a dozen books, Lisa lives in sunny Arizona with her husband and two children. She invites readers to visit her website, www.lisaplumley.com, for previews of upcoming books and more.

Lindsay Miller is knee-deep in Christmas cards and homemade fudge, but she’s never felt more like a Grinch.  Why can’t Christmas be full of magic, like in her favorite movie, A Christmas Carol…?


…Enter Fred, a sexy and eccentric stranger who arrives at Lindsay’s door out of the blue. Dressed like he just stepped out of a Dickens novel, complete with
British accent, Fred claims he’s a Messenger, sent from “Headquarters” to help
her discover the joy of Christmas. But is Fred an angel from above—or just
stone cold crazy?

Fred’s used to dealing with skeptics. Telling a stranger you’ve been ordered to inspire holiday cheer is a tough sell. But there’s a further complication. Fred’s
mission is to help Lindsay right the wrongs from her past that have been
holding her back. But somehow along the way, they’ve become wildly attracted to
each other—and falling in love is not part of the plan. Fred only has ‘til the stroke of midnight on Christmas Eve to guide Lindsay to the magical future she deserves—even if it’s a future without him…

Sierra Donovan lives with her husband and two children in Victorville, California. Readers can visit her website at www.sierradonovan.com.

The greatest gift is love…

Ski instructor Annie Bennett doesn’t have time to miss the twinkling lights and
holiday parties in Aspen and Vail. With her older brothers gone and winter just
around the corner, her parents need help with their sprawling Colorado ranch.
The most wonderful time of the year isn’t always easy for a lot of the folks in
their town, but Annie does her best—until the tall, dark, and rugged surveyor
on their neighbor’s land becomes a potent distraction…

Wyoming born and bred, Marshall Stone is a practical man. But there’s something about Annie that’s as wild and sweet as the mountain wind. He doesn’t want to tame her. Just love her. Annie Bennett is all he wants for Christmas. And for
always. But she’s too wary to believe he means it. Until he takes her in his
arms and explains without saying a single word…

Janet Dailey’s first book was published in 1976. Since then she has written more than 100 novels and become one of the top-selling female authors in the world, with 300 million copies of her books sold in nineteen languages in ninety-eight countries. She is known for her strong, decisive characters, her extraordinary ability to recreate a time and a place, and her unerring courage to confront important, controversial issues in her stories.

Now that they’ve happily married off two of their grandchildren, Anna and Felty Helmuth are ready for their next matchmaking challenge. What better way to celebrate the most heartwarming of seasons—and make Huckleberry Hill, Wisconsin, the place for unexpected love…


A difficult marriage has left the Helmuths’ widowed great-granddaughter, Beth, finished with wedlock. She’s content to live with them and make a life for herself and her toddler son. But once she turns down handsome Tyler Yoder’s proposal, it
seems only fair to encourage him to find a suitable wife. Trouble is, his gentleness and generous ways are showing her how joyous a real meeting of hearts can be. . .


After a failed courtship, Tyler thought the best he could hope for in a wife was mere companionship. But spirited Beth is the one he longs to protect, and hold
close. Earning her trust is the hardest thing he’s ever had to do. And soon,
both will discover that forgiveness and understanding are gifts that only
rekindled faith—along with the happiest of holidays—can bring.

Jennifer Beckstrand is the bestselling author of The Matchmakers of Huckleberry Hill series and the Forever After in Apple Lake series, set in two Amish communities in beautiful Wisconsin. She has always been drawn to the strong faith and the enduring family ties of the Plain people and loves writing about the antics of Anna and Felty Helmuth. Jennifer has a degree in mathematics and a background in editing. She and her husband have been married for thirty years, and she has four daughters, two sons, and two adorable grandsons, whom she spoils rotten. Readers can visit her website at www.jenniferbeckstrand.com

Will the magic still be there when they wake on Christmas morning?

Having long since lost his Christmas spirit, Rudi comes to Santa’s Secret Village looking to sell the resort. His seven-year-old daughter already knows the truth about Santa, and neither of them is particularly in the mood for the festive season.


Practically a recluse since the death of her husband, Eva’s not looking for romance. Her trip to Santa’s Village is for the sole purpose of making Christmas more festive this year for her young son. But Eva brings an unexpected sparkle to
Rudi and Isabel’s lives that renews their belief in the spirit of Christmas.

As the weather grows colder, things heat up between Rudi and Eva. But will the magic still be there when they wake on Christmas morning?

Serenity Woods lives in the sub-tropical Northland of New Zealand with her wonderful husband and gorgeous teenage son. She writes fun, flirty, sweet and sexy contemporary romances. She would much rather immerse herself in reading or writing romance than do the dusting and ironing, which is why it’s not a great idea to pop round if you have any allergies.


IF THE SHOE KILLS

The tourist town of South Cove, California, is a lovely place to spend the holidays. But this year, shop owner Jill Gardner discovers there’s no place like home for homicide…


As owner of Coffee, Books, and More, Jill Gardner looks forward to the hustle and bustle of holiday shoppers. But when the mayor ropes her into being liaison for a new work program, ‘tis the season to be wary. Local businesses are afraid the interns will be delinquents, punks, or worse. For Jill, nothing’s worse than
Ted Hendricks—the jerk who runs the program. After a few run-ins, Jill’s ready
to kill the guy. That, however, turns out to be unnecessary when she finds Ted
in his car—dead as a doornail. Detective Greg King assumes it’s a suicide. Jill
thinks it’s murder. And if the holidays weren’t stressful enough, a spoiled
blonde wants to sue the city for breaking her heel. Jill has to act fast to
solve this mess—before the other shoe drops…

Lynn Cahoon is a multi-published author. An Idaho native, her stories focus around the depth and experience of small town life and love. Currently she lives in a small historic town on the banks of the Mississippi where her imagination tends to wander. She
lives with her husband and two fur babies.