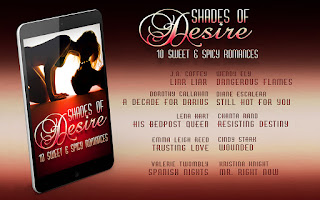 BLURB:
Now available! Ten titillating tales from USA Today, bestselling and award-winning authors. Step into the world of some of the freshest voices in romance. From spicy secrets to sweet second chances. Come find your perfect shade of desire.
Only $.99 for a limited time only! 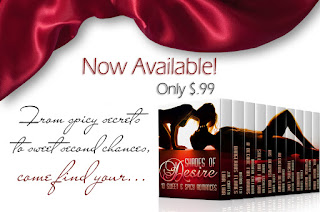 LIAR, LIAR
Divorced certified fraud examiner Jessica Barlow catches liars for a living. Sparks fly when she’s assigned to investigate a dating website owned by a man determined to guarantee she finds love—even if he has to pretend to be a client!

DANGEROUS FLAMES
Sometimes good men are taught to do evil things and it takes the strength of a sheltered woman to make things right. When Gabi learns of her father, she is asked to leave for her own safety. Fine. She’ll go… but she is taking her secret love with her, even if it’s at gun-point.

A DECADE FOR DARIUS
Jess never forgot her first kiss, especially since it came from the guy who taught her everything she knows about antiques, her livelihood. But if she wins the priceless inheritance, Jess will risk losing Darius Covington all over again.

STILL HOT FOR YOU
Shay LaCosta screwed up a damn good marriage. Now she's on a mission to get a little submission, and get her hunky husband back in her bed.

HIS BEDPOST QUEEN
Athena Lewis has a sharp mind and an even sharper attitude. Except when it comes to “Davie,” the only man who’s ever truly made her feel safe. Yet to protect the only family she has left, she must embark on a mission that goes against everything she believes in—and that includes using the last trick she has left. Her body.