Grace After the Storm by Sandy Sinnett (VBT, guest post, and GIVEAWAY) GFT

I have the pleasure of having a guest post by author Sandy Sinnett, who discusses the topic...

I never considered myself a writer at all.  Early in my teenage years, I wrote poetry - lots and lots of poetry, but stopped once I married and began a life of being a wife and mother.  Even reading became a luxury and eventually I stopped reading all together - there was no time.  I was married to the Army, and my life was work and kids.  I enjoyed it, and was happy for the most part.  Then one day life changed, and I needed to escape from the stress and realities of a world at war.  The concept of writing never scared me, but I do believe it helped me overcome the fear of being alone, and the fear that my children would grow up without a father.

I certainly didn’t think I had a book in me, but after 25 chapters, I soon realized that’s what it had become.  At first the writing was to escape worry.  My husband at the time was deployed to Afghanistan, and I was once again a single mom of four, for the third time.  My day job wasn’t stressful, but all of those things combined took a toll and the writing soon became a safe place for me to hide.  Every day on my lunch hour, I would write at least 500 words or more.  Weekend writing became even more important, in between laundry and cooking and spending time with my kids.  When I was writing, I was the happiest person I had been in years.  It made me feel like I had regained a piece of who I used to be – a person that I had lost, and it was at that moment that I found the fire and passion for writing.  Spending time creating a fictional life and characters on paper made me happy.  In that world, I can be myself, create myself all over again, create other characters and give them personality, and fill the pages with dreams of the love story I hope to have if I ever get the chance to do it over again. As a recent divorcee, I want that second chance even more.  Writing is freedom – the true harmony in my life.   What is your story?  Write it!

Grace After the Storm

Brad’s brother recently found the love of his life, and now he too longs to find his one. No one seems to compare to his first love from years ago, though - the woman he left behind for money and a career. To remind him of her love, though, on what would have been their wedding anniversary, Brad writes her a letter. Never mailed. Never read…until this year, after the storm ends.

Hannah’s estate is in foreclosure - unable to keep her family’s estate after her parents’ death. Sparks begin to fly however after the estate is purchased and the new owner arrives. Not only was Brad the love of her life, but he’s also the man who walked out on her eight years ago. At first sight, Hannah’s grandmother believes their love still exists, and even as her health fades she works to help Hannah see the good in Brad.

Hannah must deal with painful memories from her past as she is forced to work with Brad and save her estate, but will her stubborn pride cause her to lose him again?

She begins to see Brad in a new light, and the love she felt for him long ago is reborn. When Hannah’s ‘little sister’ Clare discovers Brad’s secret, though, a storm of events will begin that may destroy their only chance for love, and may risk Hannah’s life in the process. Brad and Hannah will face both tragedy and loss as they rekindle their love, remembering that grace always follows the storm.


The image of her face burned in Brad’s mind, and for a brief moment, he allowed himself to stay in the dream, paying a visit to that sweet familiar place. He remembered walking into the job site office, took one look at her sitting behind the desk, and everything around him stopped moving. It was like there wasn’t enough air in the room to breathe. The nameplate read Jules McRae, and she became the love of his life. A love he threw away eight long years ago, thinking his career was more important. She was better off without him...or so he thought. The night before he left, he wrote her a letter and tried to explain; hoping that one day she would forgive him. He stopped by the office and slipped the letter under the office door, knowing she would be the first to arrive and find it before anyone else. That was the first of many letters he would write to her, but the only one she would ever receive. Every year, on the day they would have been married, he writes her a new letter. Each one a work of fiction, written to her as if she were his wife, and declaring his love for her. Each one sealed and tucked away forever. Never mailed. Never delivered. Never opened. Never read. This year's letter would be different though...this letter would survive a storm. 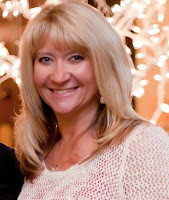 Sandy recently moved back to her hometown of Mt. Vernon, IL and lives there with her two youngest kids. She currently works in Marketing for a local Children's Home and is busy working on another book.