I have the pleasure of hosting author Jaine Diamond, who has an impressive debut novel!  And here's Jaine...

Things I Learned While Writing (Finishing) A Novel

by Jaine Diamond
is an ADULT title

Top cadet Lana Marsden lives by the rules. The most important rule of all: no messing around with an officer. She learned that one the hard way.

Now her only desire is to survive the grueling DEEP Training program and leave that scandalous past behind.

One touch from Catch, and Lana knows she’s in trouble. One night of white-hot ecstasy, and the rules melt away.

Catch knows sweet, sexy Lana is forbidden. She’s his trainee, and her overprotective brother is his best friend. But one taste and Catch knows the last woman he’s supposed to touch will be the one to bring him to his knees. Which is exactly where he wants to be…

A cadet with a secret.

An officer with a secret kink.

A whole lot of rules to be broken.
--

is the first full-length novel in the DEEP Series. Contains hot men (and women) in uniform, a violated Code of Conduct, and ice cream. Intended for adult readers, 18+.
Excerpt:

Lana's blood rushes through her body. Her thoughts rush. She swallows, trying to hold everything back. Trying to hold herself together, not come shuddering apart. Trying not to melt down right in front of him.

He stares at her, the heat pouring off his body, warming her. “Ask me.”

It takes her a moment to process the request. Then she whispers, “Please, touch me.”

Catch’s warm hands skim up her sides, fingertips drifting over the patches of skin bared by the dress. She moans, hearing her voice like it’s not her own.

Her eyes keep rolling closed. “God.” She puts her hands on his arms to steady herself. Feels the vibration where he touches her, until she’s melting into his hands, until she wavers on her feet.

“No, Lana. You’re going to stand right here, and I’m going to watch you.”

His gaze melts down her face, her throat. His hand traps her left breast like he’s holding her heart; she feels it pumping in his grip. His other hand delves beneath the hem of the dress. He strokes her through her panties, lifting her, weightless, on a wave of pleasure.
She shudders and closes her eyes, and pushes herself into him. Her fingers dig into his arms. It’s all too much. It’s not enough. Catch is stroking her through her panties. She’s in his hands and she’s melting, completely melting, and she’s still kind of floating, she doesn’t know where she is. Can’t locate herself in any of this.

She opens her eyes and all at once she becomes hyperaware that they’re just a speck floating out in the universe and nothing matters, nothing but this, this moment here with him, this tight little space pressed together, his fingers stroking her through a thin bit of cotton, and she’s here, she’s right here pressed against him, his touch sending waves of pleasure through her, her ecstasy climbing toward some distant peak. Catch. 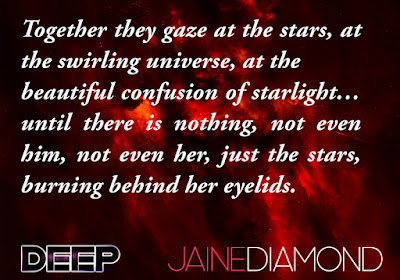