I have the pleasure of having a guest post by author Jenny Schwartz, who shares one of her passions.

I love museums, especially the small ones that are often quirky, reflecting the passions of those who work in them. Lanie Briers, the heroine of Sky Garden, is curator for the very individualistic Horry Museum that celebrates the Edwardian era (think Downton Abbey, though not so grand). Being fictional, I could site the Horry Museum anywhere I wanted, so I put it in Bloomsbury, rubbing shoulders with the British Library and British Museum, both of which have absolutely gorgeous websites for those of us who can’t visit in person.

The Horry Museum is a unique museum, possibly only viable in fiction. It lets visitors touch the objects! It’s a house furnished as an Edwardian home and visitors are invited to wonder through and imagine life a century ago. [Going off on a slight tangent, the BBC has a wonderful program on the dangers of an Edwardian home, and the associated webpage is fascinating.]

As for smaller or quirkier museums in real life…I’d love to visit the Hershey Museum—and yes, that’s because I’m a chocaholic! I’d also like to see the grand Met Museum, especially its Costume Institute.

Museums are a fabulous way to encounter amazing things. I recently visited the “Treasure Ships. Art in the Age of Spices” exhibition at the Art Gallery of Western Australia (the link will probably stop working when the exhibition ends, but it’s here), and it was fabulous! So many varied cultures and responses to encountering one another, and some of the objects were 400 years old, yet still vivid with imagination and passion.

Museums and their exhibitions are storytelling in another form, so it’s no wonder that as an avid reader and author, I love them. Do you have a favourite museum or one you dream of visiting?

On the rooftops of London, you can be anyone.

A year ago, Lanie Briers escaped a serial killer. She grew up in a theatre family and her act was mediumship, but not anymore. Life, now, is a hidden retreat above a quirky Bloomsbury museum, where she waits and watches.

Nick Tawes is an unexpected intrusion. He's a landscape architect filming a television series on roof gardens, and he intends to build one in Lanie's aerial territory. He has his own demons, old family troubles, that lure Lanie out of her refuge and into living again.

But as summer progresses and the sky garden grows, Lanie's enemy is closing in--because some secrets must go to the grave.

Head down, he forced his feet up the endless, dizzying stairs.

Abruptly, the wall of the house ended. He swayed, blinking at the transition from shadowed darkness to light. He’d reached the roof. His jetlagged brain bounced between explanations of neon light or moonlight as the source of illumination. Tokyo roofs were seldom dark; London skies seldom cloudless in his memory.

Concentrating on his feet, he negotiated the awkward step up and over a concrete wall edge, and down onto the roof. He looked up.

A woman looked back at him.

Soundless, he watched her mouth open and the plate she held drop. Water and soapsuds fountained up.

The light came from a kitchen window.

His brain kicked into gear. “It’s all right. I’m from the solicitor’s. I have a key.” Ridiculous words, but the fear in her expression demanded reassurance.

She held a phone up, soap suds running down her bare forearm to the pushed-up sleeve of an apple-green pullover. The phone was brandished as a weapon.

“A key,” he mouthed exaggeratedly. “I have a key.”

A stand-off. He didn’t dare move. He must have frightened her when she’d felt safe and alone on this rooftop. He couldn’t understand how she and her kitchen were here at all. 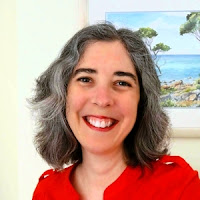 Bio: Jenny Schwartz is a hopeful romantic with a degree in Sociology and History — people watching and digging into the past. She lives in Western Australia and is working towards her dream of living by the sea. Jenny writes romantic suspense, as well as contemporary and paranormal romance.

a Rafflecopter giveaway
The tour dates can be found here
Posted by ELF at 12:30 AM