Up Close and Personal by Jody Vitek (excerpt, review and GIVEAWAY) GFT

Up Close and Personal

Four years after losing her husband, Elizabeth Farefield’s mother-in-law still blames her for his death. Finding it difficult to move forward, she takes a Caribbean cruise to contemplate her future…bumping into the past.

Divorced for five years, Robert Burnhamwood is happy with his playboy ways until on a cruise, a chance meeting has him longing for something he hasn’t wanted since his first marriage...a monogamous relationship filled with love.

But when Robert’s youngest daughter retaliates against his new relationship, his oldest daughter takes up with a man against his wishes, and a rapist terrorizes her neighborhood putting his daughter at risk, a peaceful future with new found love may be beyond Elizabeth’s grasp.

“I’m sorry. Excuse me.” The beverage she held sloshed around. She regarded the man as familiar.

“No, please forgive me. I was too absorbed by the ocean.” Taller than her five-eight height, the muscular arms that held her proved he was a man who took care of his body. She stared into pale green eyes and her gaze fell to his chin.

His features took on a quizzical appearance. “Are you alright?”

“I’m fine. Thank you.” Her body froze in place.

With a mental shake of her head, she spoke. “Do I know you?” Her voice hitched.

“You resemble a woman I’ve met. Her name was Liz.” Releasing his hold, he stepped back. “I’m sorry,” he offered his hand, “Robert Burnhamwood. I believe we met at the opening of the Kids Kare Clinic. My firm, RB and Associates, designed it.”

Focusing more closely on Robert, her head tipped to the side as she recognized him. It was the cleft in his chin. “Yes, you’re right.” She nervously drank from her plastic glass.

Another man approached and presented his hand to Liz after handing Robert what appeared to be a beer. “Hi. Scott Jordan.”

He had jet-black hair with not a grey strand in sight. An olive skin tone gave him the appearance of Mediterranean descent.

“Liz Farefield,” she offered while shaking his hand. “Are you two traveling together?” 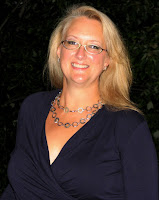 Jody Vitek is a multi-published author with Satin Romance, an imprint of Melange Books, LLC. She has been a member of Romance Writers of America (RWA) and Midwest Fiction Writers (MFW) since 2001 and is a Provisional PAN member of RWA.
Born and raised in Minnesota, Jody remains close to home living with her husband of twenty-five plus years, three children and a cat named Holly. Growing up, she enjoyed reading V.C. Andrews’ the Dollanganger series, starting with Flowers in the Attic, S.E. Hinton, and Stephen King to name a few. Today her tastes run across the board in fiction and non-fiction, in all genres.
She has traveled throughout the United States, to the Bahamas and Cancun, Mexico. Between watching her youngest son playing soccer, maintaining one of the many scrapbook albums, gardening and being the COO of the Vitek household, she writes contemporary romances.