by Cherrie Mack
is an ADULT title

Georgie Randall runs from town to town to escape her past. When she settles in Amityville, Long Island, she vows to be happy alone. But when the boss’ handsome son throws her kinky switch on, there’s no turning it back off.

Mr. Calvert raised one eyebrow. “Hello there. Georgie, is it?” He held out his hand to her in greeting.

“Yes. Georgina, but everyone calls me Georgie.”

Adam excused himself to the men’s room, leaving her alone with him. Feeling repelled by his presence, Georgie shook it off and offered a fake smile while struggling to make conversation.

“So, Mr. Calvert, how do you like Tampa? Have you visited anything in particular?” She winced when he turned and took her hand in his. He kissed her palm. It was a wet, sloppy, and somewhat vulgar gesture. She pulled her hand away and discreetly wiped it on her sweater. He ignored her question and asked one of his own.

“I’m a paralegal for Tate and Bloom.”

His leer was quite obvious, making her uncomfortable.

When Adam returned, he placed his hand on her back and gently rubbed in a circular motion. This was his signature be-supportive request.

“Shall we get a table?” he asked. All her focus would be centered on Adam as she settled in for what looked to be a very long night.

Hours later, Georgie tried hard not to be completely repulsed by the drunken behavior of Joseph Calvert. His leering, when Adam’s attention was diverted, was causing her major anxiety and pulling her back into a past she wanted to forget. The situation was all too familiar. But Georgie reminded herself that she wasn’t drinking, and even if she was, Adam loved her.

Joseph Calvert, with a slight slur, announced he would buy one last drink and call it a night. A feeling of relief swept over her, but the prickly bumps on her skin reminded her she wasn’t out of the bar and away from Calvert just yet. Adam offered to retrieve the drinks from the bar, leaving her alone with Calvert. He leaned over and grabbed her hand again.

“Where did you say you went to college?” 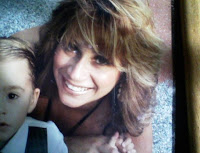 Cherrie Mack is a multi-published romance author who grew up in Flushing Queens NY, the youngest child of six. The city’s diversity gave her a great appreciation for many different cultures and lifestyles. After love finally claimed the girl from the city and dragged her to the suburban madness of Long Island, she settled into a quiet life with her new husband. Two children and one mini-van later, the family found themselves moving towards the sunny skies of Florida where they currently reside.

Cherrie is happiest sitting behind a keyboard doing the one thing she loves most—writing. However, when she isn’t writing, she is struggling to man her website, promote her books, keep up with social media and run a household. She loves to hang out with her 12 and 10 year old kids and spend time with her smart, sexy, fun loving husband. She struggles to master the art of meditation but with so many people living inside her head, demanding a story of their own, the task is daunting. She takes time to relax by playing with her best friends–Bailey and Simba.

A member of Romance Writers of America, Cherrie is slowly spreading her wings as a romance author. Look for her books at all digital bookstores such as Amazon, Barnes and Noble, Bookstrand, ITunes, Nook, Kobo and many more.