Most days, Elea couldn’t care less about having Necromancer magick. Who needs to conjure skeletons and sprits when you’re a farm girl? Elea only uses her powers to speed up chores and scare off suitors.

Everything changes when the evil Necromancer Tsar curses Elea. Now, she only has five years left before she burns as a ghost, tortured for all eternity. They say there’s nothing she can do, but Elea disagrees. She decides to embrace her Necromancer powers, train as a magickal assassin, and kill the Tsar… All before his curse kills her. Impossible as it may sound, Elea thinks she has it in the bag, but then everything goes horribly wrong.

That’s when a handsome mage named Rowan steps up to help. Elea wants an ally, but she doesn’t need all the mixed-up feelings that come along with Rowan’s crooked smile.

An assassination mission is no time to fall in love, but Elea’s heart may have other ideas…

Once I curled into my tiny bed, I expected my dreams to be about Tristan. After all, I’d said his name before I fell asleep. Normally, he and I would meet in my old farmhouse. Instead, I dreamt that I sprouted wings and flew into the starry sky. Wind flowed over my body, and I hummed with pleasure as the cool air caressed me. A vast and empty desert rolled below, a vista of golden sand that was patterned in delicate ripples.

All of which was very strange.

Usually, if my dreams didn’t take me to Tristan, then they’d send me wandering aimlessly through the Zelle, worrying myself sick over some nonsense question like ‘why did I show up nude to breakfast?’ But tonight, I might as well have a rope about me, the pull across the desert was so strong. There would be no meandering this time, and my nonsense worries were gone as well. I only had a real concern for my friend.

Why wasn’t I with Tristan right now? Was our bond broken?

My wings kept driving me toward a lone figure crouched before a fire. As I flew in closer, I saw that it was a man dressed in Caster leathers. He was well over six feet tall with brown hair and broad shoulders. I wanted to touch the ropes of muscle that wound down his arms.

Wait a minute. Where did that thought come from?

Only Necromancers who’d renounced the cloth had the desire for a mate and children. Grand Mistresses weren’t supposed to be attracted to the opposite sex at all. I certainly never had been before, even before I joined the Zelle.

This man was dangerous. I wanted to fly away from him, but my wings only brought me nearer. Firelight cast deep shadows over the man’s rugged face, highlighting his square jawline, light beard, and bright green eyes. He stared into the fire, repeating the words of an incantation.

“I call upon you,” he said. The rest of his spell was lost on the wind. A haze of red mist swirled about the ground, the unmistakable sign of a Creation Caster spell. One word carried above the noise. “Viktor.”

I gasped. What would this Caster want with our Tsar? The man glanced up, his green eyes looking straight at me.

The man spoke the last words of his incantation—“so mote it be”—and lowered his head once more. The red mist of his spell disappeared.

*The book is available NOW 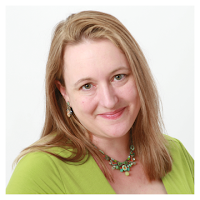 Christina graduated from Syracuse University’s Newhouse School with BA’s in English along with Television, Radio, and Film Production. An avowed girl geek, Christina loves creating immersive fantasy worlds with action, adventure, romance, and kick-ass female protagonists. As part of her work in Ink Monster, Christina has co-developed the ‘Heroine’s Journey,’ a blueprint for telling female myths inspired by the work of Joseph Campbell. She lives in Newton, MA with her husband, son, and golden retriever Ruby.