Manchester Marauders offensive lineman Jason Stafford has everything going for him until he is blindsided by a calculating woman who names him as the father of her unborn child. Unsure of the validity of her claim, he treads carefully, despite being willing to accept responsibility.

Maude Killion, the younger sister of one of Jason’s teammates, has been sidelined by a crush on Jason. Determined to revise her game plan, Maude asserts her independence from her overprotective brother and a controlling boyfriend.

While working on a charity project, Maude and Jason discover they play well together. But when Maude becomes the victim of a malicious foe, it appears that another player has entered the game—one with deadly intentions who will stop at nothing to win.

Now, Maude and Jason must join forces to defeat their opponent and score a victory for love.

With kiss-roughened lips, Maude gazed up at him. “I feel like I’ve entered an alternate reality.”

Jason nodded and his grin spread. “My kisses have that effect on women.”

Eyes narrowed, she stood and slapped his arm. “Shut your face.”

“Shut it for me.” He grabbed her arm, skated his hand down to her fingers, and…heard the clicking of heels out in the hallway. He let go of her hand and stepped away, but not before dropping a bombshell sure to upset her further. “I know you’ve waited for me, Maude.”

“What? You don’t know anything, you conceited jerk.” She shoved at his chest before glancing at the door. “If I had been waiting, I’d have stopped a long time ago. Now that I’m on my own, I’m heading into the man-free zone. I’m done with all of you, because you cause me nothing but stress.” After her loud declaration and dramatic hand movements, she kicked a stuffed elephant.
Seeing her fury, he bit back a grin. She’d never let him get away with anything, and he kind of liked that thought. Still…he needed to lighten the mood. “Hey, hey, hey, don’t take out your anger on poor little elephants.” He picked up the injured party and rocked it in his arms.

Maude rolled her eyes. “Go away. And take that elephant with you.” 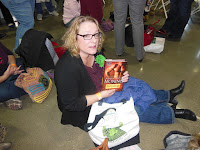 In the spring of 2013, Jillian Jacobs changed her career path and became a romance writer. After reading for years, she figured writing a romance would be quick and easy. Nope! With the guidance of the Indiana Romance Writers of America chapter, she’s learned there are many "rules" to writing a proper romance. Being re-schooled has been an interesting journey, and she hopes the best trails are yet to be traveled.


Water’s Threshold, the first in Jillian’s Elementals series, was a finalist in Chicago-North’s 2014
Fire and Ice contest in the Women’s Fiction category.

Jillian is a: Tea Guzzler, Polish Pottery Hoarder, and lover of all things Moose.
The genres she writes under are: Paranormal and Contemporary with suspenseful elements.