I have the pleasure of sharing a guest post by author Amanda Meuwissen who answers...

ELF: Which author(s) has/have been the most influential to you and how or why?

People often ask what authors were the most inspirational for me growing up, and for the most part, I didn’t have a lot of authors that resonated, just certain stories. I didn’t tend to read much from one author, but sought out plots that drew me in at any given time.

Anne Rice was and was not an exception to this.

I read all of her original Vampire Chronicles starting when I was 12. I read a little of the New Tales, but mostly let any interest in those die off when the development of my favorite characters started to stray from what I ultimately wanted. But I never read any of her other series. I was solely engaged with the Brat Prince and his supporting cast.

The story of how I started reading a very adult book series at such a young age is one of my favorites. Ever since I was very young, I’ve had an obsession with vampires. I pinpoint the start of that to watching the cartoon Count Duckula when I was little, and even seeing iterations of Dracula in other mediums quite young, but this all came to a head when the film adaptation of Interview with the Vampire came out in 1994.

I was entranced by the trailer. I wanted nothing more than to see it. But since it was rated R, my mother said no. Stumbling upon the book in Barnes and Noble, I went away with a mission. I saved my $5 a week allowance for over a month so I’d have enough money to purchase the hard cover and defy my mother’s decision. When I tried to buy the book, she relented and said she’d let me see the movie and then I could get the book if I still wanted it.

Well, I loved that movie, and today it remains one of my favorite films. I can speak almost every line along with the characters. Anne Rice’s vampires are my favorite singular version of the creatures, and they always will be. I proceeded to read the books and never looked back.

It wasn’t just the writing that drew me in though, but the characters. I fell in love with Lestat, and because Rice had such an integral hand in the creation of the film version, it was a great adaptation for all its changes, and Tom Cruise embodied Lestat so perfectly, my internal vision of him never strays far from that portrayal.

That’s what really good writing, good storytelling does—it makes the characters, even if just one, so alive to readers that they remain enamored with them for life. Lestat will always be one of those characters that I love without hesitation, because of how Rice wrote him, how I got to see him both on the page and in film.

My newest novel, Life as a Teenage Vampire, takes elements of Rice’s vampire lore but also has its own tweaks, and definitely has a lighter, younger tone. It’s Young Adult. It is the novel I wish I’d had to read when I first picked up Interview with the Vampire—not that I have any regrets.

I hear Rice is thinking of bringing her vampire series to TV. If so, I hope it’s amazing.

One thing I choose to do very differently from Rice, however, is how I address fandom. Allowing fans to be inspired by your work to write their own connected stories and to draw art, is a wonderful, beautiful thing, that I would only ever encourage. I wish one of my writing heroes felt the same, but alas, I can’t embrace everything about Rice; I’ve since had to move on from my naïve younger years thinking she could do no wrong.

But she still gave me something beautiful that I know to this day influences my writing, especially where it concerns vampires.

Life as a Teenage Vampire

Emery Mavus just wants to survive his senior year of high school. Becoming a vampire complicates things. So does a bizarre mentor, a group of vampire hunters, and an unexpected, new attraction for his openly gay best friend, Connor. An occasional uncontrollable hunger for blood might be the least of his worries.

It was a trick. Emery had made it all up, knowing that the details would lead Connor to vampires. These were just Halloween fangs. Connor wasn’t really hypnotized into submission; he was just stunned, believing his own crazy imagination. He’d longed for years to have Emery this close, after all, crowding him into a corner, lips descending. He’d just imagined them descending a little closer to his mouth, though his neck wouldn’t be so bad…

…if not for the sharp sting, the breaking of the skin and rush of blood sucked out of him so fast he felt dizzy, and then—wow.

It didn’t hurt at all. It felt like Emery was tucked into his shoulder intimately, fully aware of the pleasant buzzing he caused in Connor’s gut every time they touched. Connor had dreamed of this, imagined it just like this, and felt lulled by Emery’s body being so close, and the way he shivered feeling those lips on his skin. He almost thought he heard Emery’s soothing voice whispering affirmations he’d always wanted to hear.“Em…” Connor breathed out, barely audible.

The room was dimming, but he felt cozy where he was. His arms were limp and heavy as he lifted them to pull Emery closer, feeling the soft fabric of the sweater against his somewhat numb right palm. He pulled tighter, twisting flesh and plastic fingers alike in the fabric, pulling…with the faint sense that he should be pushing instead.

“Em…” he choked out like a whimper, like he was crying. Why was he crying? This was everything he’d ever wanted… 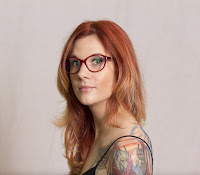 Amanda has a Bachelor of Arts in a personally designed major from St. Olaf College in Creative Writing, and has been posting content online for many years, including maintaining the blog for the digital marketing company Outsell. She spent a summer writing screenplay script coverages for a company in L.A., and is an avid consumer of fiction through film, prose, and video games. Amanda lives in Minneapolis, MN, with her husband, John, and their cats, Helga and Sasha (no connection to the incubus of the same name).