Jillian Whitkins is an event planner who is ready to throw in the towel. She is managing a birthday party with a 50 Shades of Grey theme—and it’s turning into a disaster! The birthday girl is drunk, the guests are harassing her staff, and she is about to offend a real-life Christian Grey.

He is hot. And it’s not just physical. There’s a sexual energy that radiates off him like Sterno under a chafing dish. I could stare at this man’s profile all day. I smell the faint scent of chlorine, and visualize him stepping out of a swimming pool wearing nothing but a smile.

From somewhere deep inside, I let out a little “Ohhh.” Not like in “Oh, dear.” More like “Ohhh Santa, bring me him!”

When his head turns in my direction, I know I should look away. Yet I can’t not see what he looks like. I hope there is a tremendous scar across the far side of his face (that he got in a duel) because then he wouldn’t be perfect, and if he wasn’t perfect, I might have a chance. Yet when his head turns and his eyes lock on me, I can see there’s nothing marring his square jaw and sensual full lips.

He winks. My body shudders, my grip loosens, and that expensive bottle of champagne falls to the floor. The impact dislodges the cork, which ricochets off the ceiling into the tower of flute glasses, knocking them over like bowling pins. They shatter into a million shards that rain down over the bar.

This is a sign. Anytime I’m attracted to a man, it always ends badly.

Link to buy book – only on Amazon & Amazon KU

(note from ELF...do yourself a favor and get this one...it's so much fun!) 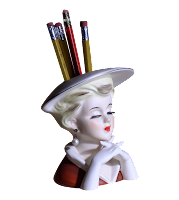 Robyn Kelly is my pen name. I work for one of the top boutique event planning companies in San Francisco, and I can't risk having our clientele (or my boss) discover my passion for aggressive, sexual, alpha men.
I write the kinds of stories I like to read. I realized the top four things I love in a romance are:
The chase. I don't care how hot or rich the hero is, he's got to work for it if he wants in to my heroine's panties—for at least four chapters!
Second chances. My heroines aren't virgins. They are women who have loved and lost before.

I'm not against virgins, some of my best friends in high school were virgins. I just think they should stick with bad boys, and leave the billionaires to us experienced women.

Humor.  I love a book that can get me both hot and laughing.
Happy endings. They’re so much better than cliff-hangers.
Website
Twitter:  RobynKellyAuthr

Best Laid Plans Box Set by Robyn Kelly features Jillian Whitkins who is about to give up on her event planning business that has capitalized on the “Fifty Shades of Grey” theme when she encounters San Francisco’s most eligible bachelor, Jackson Hunter, under less than ideal circumstances. She fascinates the dominant man by continually changing the rules of the lifestyle he is used to, and constantly surprising him. Their sizzling affair continues to amaze both of them, as they slowly reveal their secrets and their past pain, but the connection they form may not be enough to save their fragile relationship from the pressures exerted on it by others.

This is a fun and erotic contemporary story that plays with many of the elements popularized by the ‘Fifty Shades’ series. Although this is termed a ‘boxed set’, I would have been pretty frustrated to have only read a single story since I was hunting around looking for the next book when this set ended, as things were not tied up in a nice bow, and I mistakenly thought there was an additional story in the review set. One thinks that I would have realized that this too would emulate the other series, but I just wasn’t making that connection, lol.

I found the author’s style to be light and engaging, with a deft touch for blending wryly humorous situations and sizzlingly erotic scenes. I would almost term this BDSM-light, because many of the interactions play with elements of dominance and submission but leave an escape (in addition to a safeword) so there is no doubt that the activity is definitely consensual. This couple approaches life very differently yet they mesh so well, it’s amazing that the tragedies that have formed their characters have honed them into a puzzle piece that actually fits with someone else. I think that Jillian is a much more relatable character (I’m one of those who isn’t thrilled with Anastasia’s personality) because she combines naivete and snark and I was fascinated by the intensity provided by Jackson and touched by the struggle with his demons and shocked by the betrayal he has to deal with.