How to Catch A Cowboy by Sandra Madden (VBB, excerpt, and GIVEAWAY) GFT

How to Catch A Cowboy
by Sandra Madden

Matilda Rose Applebee isn't looking for love when she captures Cooper T. Davis at gunpoint. Her younger sister is in the family way and claims Cooper is responsible. Matilda aims to haul the snake-belly back to her sister's waiting arms. But Cooper insists Matty's sister is mistaken as they begin a long and dangerous journey.


Matilda Rose Applebee had bided her time until she figured the fast-talking drummer had passed out. No more than a silver-tongued swindler, Cooper T. Davis drifted from town to town selling patent medicine. Until now. Marty was about to put an end to his nefarious career. With the element of surprise on her side, she'd slipped into his room, Winchester at the ready.

The man was snoring loud enough to cover the noise of a stampeding herd of cattle, let alone one small woman.

She hissed in his ear.

He moaned and pulled the pillow over his head.

"You're comin' with me now to marry my sister or I'm makin' her a widow. Take your choice."

Before she could stick the rifle in his ribs to show him she meant business, the shad-belly rolled over, away from Matilda. He didn't even bother to open his eyes. 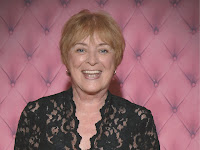 This mostly truthful biography is longer than most of my books. But the older you become, it seems the more there is to say.  Whether it’s important or not.  Whether anyone is listening.
I was born in New York City but raised in Winthrop, Massachusetts, a small isthmus that juts into the Atlantic Ocean five miles north of Boston. During the long cold winters – read REALLY COLD! – I read and I wrote. My favorite authors were Bronte and Austin before they became required reading. I wrote stories to amuse myself which led to writing the 6th grade school play. When I discovered drama classes in the ninth grade, I gave up writing for a few years. And, yes, I was the perky cheerleader who played Emily in Our Town.  Not a dry eye in the house!

Following high school graduation my family moved to the warmer climate of South Florida - just when I was getting acclimated to the constant cold.

At the University of Miami, I majored in Radio/TV/Film. (As the program was called in those days - and one of the first departments of its kind in the nation.) I minored in drama. For three of my four years in college I acted in thirty- minute radio dramas almost on a weekly basis. Inevitably these live broadcasts of Theater X were love stories in which I played the heroine. Usually, the tragic heroine. I credit this experience as having set me on a course of no return. Romance and fantasy became my fate.

But first I experienced a short-lived career as a broadcast journalist. I was too far ahead of my time to fight the slings and arrows of the newsmens’ contempt, so I switched. I became a broadcast copy/promotional writer and worked in the Miami and Los Angeles markets. But my most rewarding work was as a writer/producer/host for a Miami PBS station. (Due to the public broadcasting budget each person is expected to fill a variety of roles for one salary. One small salary.) I focused on How-To series, public affairs – of the political kind - and women’s issues. During this time I met many inspiring women who shared their stories with me, women whose remarkable achievements, great spirits and strength influenced my work as I started to write. First, I became a published poet. It didn’t take much time for me to write short verses.

As with most writers, I wrote my first historical novels in the evenings after my day job. A second wind is required to do this and it magically appears with the passion for writing.

Passion for the writing and persistence in submitting are the keys to becoming a published author.  The secrets of the sisterhood gleaned from lessons learned along the way.

Not long after being published I discovered that a writer’s life is not all about the voices in your head demanding release to a page – frequently at an inopportune time. And it’s not all about three figure contracts, champagne tours and as much chocolate as you can consume. Oh. No. A writer’s life includes thundering deadlines, dry spells, assorted blocks, carpal tunnel syndrome and frozen shoulders. Occasionally, the green-eyed monster rears her head and wraps grown women in knots. But most of all, writing romance is a wonderful love story in itself. There is nothing else a romance writer would rather be doing. She is totally in love with romance and with the ability to share her stories with gracious readers. Thank you, dear reader.