Yours Truly by K.J. Pierce (VBB, excerpt, and GIVEAWAY) GFT

Yours Truly
by K.J. Pierce

Izzie Greene never wanted the limelight. As a caterer for Poe, the top-rated U.S. TV show, she had background player down pat. Her main focus was to spoil the cast and crew and fantasize about her celebrity crush, Scotsman Cardwell Bennett, while navigating the daily chaos.

Izzie’s professional life takes a sharp left turn when her ex-boyfriend unexpectedly arrives on set. Her personal life spirals into Hell when she runs afoul of an unethical paparazzo. Thrust into the public eye, her notoriety is fueled by equal measures of constant scrutiny, speculation, and half-truths. Her rumored romance with Cardwell further stokes the flames.

Held captive by the media, accident-prone Izzie struggles to keep her privacy, secrets, and sanity intact—not to mention her sense of humor. With help from her best friend Delly, her temperamental cat Edgar, and unexpected backup, Izzie might withstand the onslaught. And survive the season.

“You’re my best friend. You’re supposed to love me.” My bottom lip jutted out, quivering.

“And you’re an incredible baker.” Her voice rose smugly over my protestations. “Cardwell B. loves your chocolate and cranberry scones.”

“That’s rich.” I snorted my disbelief. “If Ritchie doesn’t think I’m good enough, then Cardwell’s sure not going to.”

“Don’t be stupid. Cardwell is nothing like Ritchie. He’s a nice guy.”

“Riiiiiight.” Nice guy didn’t translate to much in my dictionary. Ritchie had been nice, too...once upon a time.

Delly ignored my sarcasm. “No joke, Izz. He cornered me yesterday while everyone scrambled for that stupid bird, raving about those damn scones.” She shoved a fistful of tissues into my hands. “I know you’re upset, but get your shit together.”

I teared up again and motioned to the clothes- covered futon. “I was trying.”

“Feeling sorry for yourself isn’t trying.” Delly sat next to me and threw her arm around my shoulder. “Let’s finish packing. Then we’ll have girls’ night. Tomorrow morning, we’ll work the gig then head to the shop, and you’re prepping scones to bake first thing on Monday morning. They’ll be freshly made. Hot and steamy. Butter will drip off those scones.”

I shot her a death glare.

“What?” Delly pulled her innocent face. “At least he can act.” 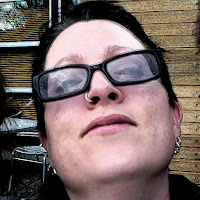 K.J. Pierce is a jack of all trades. Her interests are varied enough to make this a requirement for a happy existence. Her main goal in life is to understand the human condition, which she explores through various mediums, including fiction, creative nonfiction, and scriptwriting. She sometimes succumbs to itchy-feet syndrome, a holdover from her Army Brat days. As a result, she can sometimes be found bouncing from locale to locale. She earned a BA in English Literature/Creative Writing from Agnes Scott College and a MLitt in The Gothic Imagination from the University of Stirling, Scotland. She puts them to good use by crafting stories that run the gamut in terms of genres, but which always include an exploration of the societal misfit and the darkness which pervades all facets of life, even in the most comic of circumstances.

K.J. currently lives on the east coast of Central Florida with her cat Dorian Gray, who lives up to his name by striving to be the states most prolific lizard serial killer. Yours Truly is her first novel.