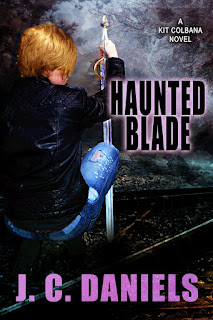 Haunted Blade
A Kit Colbana Novel
By J.C. Daniels
About the Book:

Never let it be said that Kit Colbana had ever been given the easy road. Or even the semi-paved road.  Only weeks after dealing with the mysterious—and murderous—being called Puck, she’s got another killer on her hands. Perhaps even two.
Some of the bodies turning up bring up haunting memories of a past she longs to forget, but as always, that past is chasing her at her heels, like a hated shadow.

As the body count racks up, there’s an imbalance of power, particularly among the vampire population and Kit must yet again deal with ugly memories as one of the monsters who tried to break her is set free to deal with the imbalance of power.
Yet while a power struggle rages in East Orlando, there’s another, more subtle battle taking place and Kit feels like the center of it all.

Arrogant? Maybe. But the dead bodies don’t bear the mark of her grandmother’s pet killer by sheer coincidence…and she doubts her nemesis being released is either.

Other books in the series: