Make Me a Match
by Mackenzie Lucas
ADULT title

Widower Mark Cage is rusty at relationships. He owns the micro-brewery that supplies
the restaurant and bar at St. Augustine's premiere spa resort, Essence, with its award
winning local craft beer. And he’s been focused on building his business and raising
his teenage daughter ever since his wife died ten years ago. Nothing else.

When he runs into a sweet kindergarten teacher who is vacationing in St. Augustine
and staying at Essence everything changes. A sudden, inexplicable encounter with a mystical tree
known for its legend of bringing lovers together, convinces Mark the schoolteacher is
his destined match. However, his encounters are disastrous.

His only hope of persuading the woman he wants to even consider a date with him is
working with Essence’s on-site relationship guru, Athena Sullivan. A reknowned relationship coach, Athena is the opposite of everything Mark wants in a woman. She’s feisty,
independent, and challenges him at every turn. Sparks fly between the two from their
first meeting and flare into a blazing inferno as Athena helps him navigate the dating scene.

After a series of too-perfect, mis-queued dates, Mark realizes maybe the woman of his
dreams is not a sweet schoolteacher after all. Maybe she’s a feisty, independent, sexy relationship coach who stands up to him and is everything he’s always wanted or needed in a woman.

If he opens himself up to true love, he might just find second chances at love are possible and that his perfect soul mate is closer than he thinks.


“Uh oh. She wants something,” Mark commented to no one in particular as he pushed away the stack of invoices in front of him. Running a brewery was work he didn’t usually mind. Today, though, his focus was shot. “What do you need now, dollface?”


“Nope. I don’t want anything. I’ve got something for you. It’s a surprise.” She waved a folder in his face.


He went to grab for it and she snatched it back. “Hold on. Not so fast.”


Mark settled back into his chair and laced his hands behind his head, prepared to wait for the reveal. “Okay, so what’s this all about?”


“Weeeeeeeell. It’s good for you, but you’re not gonna like it.”


“Sounds like what I used to tell you about eating your Brussel sprouts and broccoli.”


“Eww.” Her face comically contorted. “You don’t need to get nasty.”


Amazing. The girl still hated broccoli and Brussel sprouts to this day.


“It’s in no way as bad as Brussel sprouts.” She blessed him with one of her brightest smiles. He was in so much trouble.


“This is going to be bad.” He groaned. “Out with it. What is it? College is ten grand more? You want to go to school in the Grand Caymans?”


“Ah, no, not even a chance. You’ve been accepted into the University of Virginia. That’s where you’re going.”


She pretended to pout for a few moments, then smiled. “Okay. Charlottesville it is, then. Sooooo. Ready for your surprise?”


“This never ends well for a man.” Mark sighed and pulled at his ear. “How much did you spend?”


His front chair legs slammed to the concrete floor. “You what?”


“Yes, and you were saving your money for school. Books and such.”


“Right.” Her gaze skittered away. “I’ll get by. Most of the books are online anyway these days.”


“What did you spend the money on?”


“Aight. Remember the part I said would be good for you, but you wouldn’t like?”


“That’s this part . . . I purchased a three-session package for you to meet with a relationship coach to help you with your dating skills.” The words rushed out in a tumble, then she held her breath.


When he didn’t say anything after a few seconds, she blew the breath out.


“What the hell is a relationship coach? And why do I need one?”


“Come on, seriously, Dad? I don’t see women beating down your door.” She cleared her throat. “And it’s important to me to know you’re settled before I move away to school.”


“Who’s the daughter here? And who’s the parent?”


“Not my fault if you act so immature and cuss all the time.”


“I’m an adult. I’m allowed.” He frowned. “You didn’t answer my question, what is a relationship coach? And why did you waste a grand on one?”


“Someone who helps you navigate dates and meet new women. Kind of like a matchmaker in the old days.”


“I’ve already met the woman I want to date. Daphne.”


“She did not. Why is everyone saying she ran? I did not scare her away. She was whisked away by Jezebel.”


The sexy blonde at the bar with the big boobs who’d been hanging on Jason, propositioning him while his fiancé chatted out in the lobby with Daphne. That Jezebel, that’s who. But Mark wasn’t about to say those words to his daughter. “Never mind.”


“So, you’ll have to meet with her. She’s agreed to help you through three dates, and the aftermath.”


“Well, might be a little shell-shock on her part. You’re not the easiest man to deal with these days.” Jamie crossed her arms over her chest. “Just saying.”


He growled, “Why does everyone say I’m not easy? I’m the pleasantest man in St. Augustine.” It was not lost on Mark that he was glaring at his daughter while he asserted his amiability. Damn.


“Because you growl a lot?” She contemplated him, an expression etched on her face that declared him deranged. Or stupid. “And you scowl.” She came around the desk to place the folder in front of him. Then she smoothed his forehead, her thumbs manually flattening his brows. “There, that’s better. You need to practice. You seem a little scary to outsiders. Only those of us who love you know differently.”


He hugged her around the waist, burying his cheek in her belly for a second before he let her go. “You’re all that counts.”


“No, you need to get a woman to love you. Not your family, who must love you no matter what.”


He gave her the stink-eye.


“There you go again. Stop it.” She swatted him. “Meanie. You need help to lighten up and I have just the person.” She tapped the folder. “She’ll be great for you.”


He opened the folder to find a brochure describing the services provided, the mission of the counselor or coach, and a checklist of what to bring to the first session. Shit. He couldn’t do this. He tossed the brochure onto the desk. “I’ll get your money back.”


“Nope. No can do. It’s non-refundable.” She crossed her arms defiantly.


“You’re under eighteen. It’s not legal for them to take your money. They have to give it back.” He grabbed his keys. “I’ll go now.” He picked up the brochure to find the address. “Where did you say they’re located?”


“She’s based at Essence. But Dad, you’re not getting my money back. Gabby signed for me. Besides, you need to do this. Please. I can’t leave for college in the fall if you’re not settled, or at least on your way to making better inroads with the female population.”


Her mouth firmed. “I mean I won’t go. Period. I see how lonely you are. Once I’m gone, it will only be worse. I can’t leave you all alone, knowing how handicapped you are in the relationship department.” She shoved the brochure he held toward him. “It’s only three sessions. It will be good for you and it’ll give your daughter peace of mind. Please do it. For me.” Her eyes filled with tears.


Dammit. He didn’t do tears.


Mark sucked in a deep breath through his nose, slumping in defeat. “All right. Whatever. I’ll do it.” He shook his finger at her. “But you are leaving for school come August twenty-fifth.”


Jamie squealed and launched herself at him, arms tight around his neck. She kissed him on the cheek and let him go. “Thank you. Your first session is tomorrow. You won’t be sorry, I promise.”


She waved as she departed.


Mark sat back down in his chair and flipped through the brochure. On the back page, the picture of the relationship coach jumped out at him.


He was already sorry for his promise. 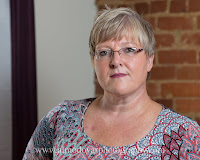 Mackenzie Lucas is an avid reader of genre fiction. She writes contemporary and paranormal romance, and listens to an eclectic mix of music. She loves a good story, whether it’s an erotic short, a full-length romance novel, or the narrative slice-of-life found in country music. In any story, emotional integrity and authenticity are most important to her as well as a big dose of romping hot sexual tension. She enjoys smart-mouthed, sexy heroines, hunky alpha heroes who know how to take care of their women, and plot twists that surprise her, but most of all, she just wants to experience the satisfying emotional arc of a character falling in love and finding what he or she needs most in life.

Mac is a small-town country girl with a world-traveler’s heart. She grew up in the Allegheny Mountains of Pennsylvania and she’s lived in Dublin, Ireland, within spitting distance of New York City in Long Island, and now in the Washington, D.C. area. She obtained her undergraduate degree in English Literature from Dickinson College and received her M.F.A. in Writing Popular Fiction from Seton Hill University. She’s currently an author for Soul Mate Publishing and is represented by Otis and Mackintosh Literary Agency.
With Mackenzie Lucas—whether you’re reading her light paranormal romance or her small-town-based contemporary romance—you’ll always find a heart-warming love story about connectedness, community, and emotional authenticity. And, no, it doesn’t hurt that all her heroes are panty-melting gorgeous alphas and all their sexy, sensually aware heroines know how to stand up to them, give no quarter, and love them just as they are.
Watch for new titles by Mackenzie Lucas.
Website
Facebook
Twitter
Goodreads