Kandi Cain inherited her Dr. Doolittle abilities from her grandmother and became a psychic pet detective. To her dismay, she just acquired the power to communicate with the spirit world, but dead people give her the willies.

Just when Kandi thought her life couldn’t get more complicated, the neighbor from hell moved in next door. The nasty guy’s name is Dutch Callaghan. How can someone so gorgeous be such a dick? Kandi could chalk some of it up to his job. Dutch is a Phoenix PD homicide cop.

Kandi’s current case is rescuing a Yorkie from a brutal dog fighting ring. Little does she know her dog napping suspect is involved in a series of brutal murders. Disguised as an elderly nun, Kandi rescues the Yorkie and, in the process, blows the hell out of Dutch’s undercover operation.

Kandi now finds herself a person of interest in her client’s murder and her sexy-as-hell, pain-in-the-butt neighbor is in hot pursuit of the Ninja Nun. Is Dutch about to slap the cuffs on? Only time will tell.


If I stopped them, he’d know for sure I could control critters, but would anyone believe him?


The roosters’ crowing got louder and louder.


My headache got worse and worse. I only had four glasses of champagne and I shouldn’t be this hung over.


Dutch shouted, “Shut them up or I’m going to write you a ticket for disturbing the peace.”


“Arrrgh!” I climbed out of bed, opened the bedroom window and leaned out. “Go ahead. It’ll get laughed out of court.” My eyes widened in surprise. Shadows wrapped around Dutch’s abdomen, but left his bare chest and legs exposed. I suddenly had the urge to run my hands all over those yummy muscles. Was he naked?  And if he was, how did I get him to move into the light?


I smacked my forehead. What in the hell was wrong with me? Why was I drooling over the asshole? I had seen a nude man before and his little pecker kinda reminded me of a one-eyed snake. “How about I call 9-1-1 and report a naked prowler.”


My girly parts danced in delight. Whoa, he was hung like a stallion. His jockey shorts displayed every inch of his impressive morning woody.


Dutch crossed his arms and smirked. “Like what you see?”


“Really?” The bastard laughed and shook his head. “You’re lying.”


“Am not.” God, that sounded juvenile.


“I have it on good authority that you’re a virgin.”


I was going to kill her.


I pulled my eyes off his crotch. “And why should I believe you?”


Like I believed that, but the crowing was making my head throb. “Fine.” I reached out psychically. “Stop crowing.” 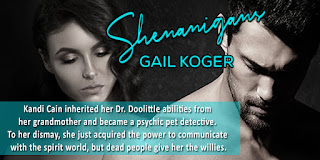 I was a 9-1-1 dispatcher for the Glendale Police Department and to keep from going totally bonkers – I mean people have no idea what a real emergency is. Take this for example: I answered, “9-1-1 emergency, what’s your emergency?” And this hysterical woman yelled, “My bird is in a tree.” Sometimes I really couldn’t help myself, so I said, “Birds have a tendency to do that, ma’am.” The woman screeched, “No! You don’t understand. My pet parakeet is in the tree. I’ve just got to get him down.” Like I said, not a clue. “I’m sorry ma’am but we don’t get birds out of trees.” The woman then cried, “But… What about my husband? He’s up there, too.” See what I had to deal with? To keep from hitting myself repeatedly in the head with my phone I took up writing.