My Past, Your Future by Gabbi Grey (Spotlight, excerpt and GIVEAWAY) RBC ADULT title

My Past, Your Future

Callum MacLaren, a professor from Scotland, visits Willow Springs, Vermont during the Winter Solstice to study and explore the rich history of St. Joseph's Cemetery. His encounter with a sexy soldier in a tattered Civil War uniform is a captivating puzzle, and the more he learns, the deeper his attraction.

A hundred and fifty years ago, Elijah Freeman was killed during the Second Battle of Fort Wagner and woke up in Willow Springs, the only home he'd known. Alone, he roams the town, unable to leave or interact with a single soul until an intriguing Scot addresses him. Even stranger, the man can see him, hear him, and touch him--a sizzling caress that leaves Elijah aching for more.

But will Elijah return to his ghostly form when the magic of the solstice fades, or is Callum's love enough to keep him in the land of the living? 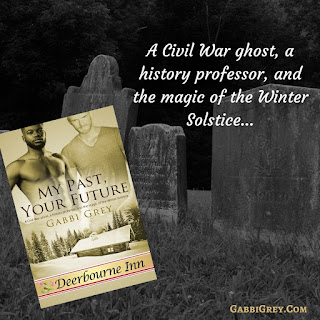 “I’m not sure I have many answers.” And Elijah wasn’t. He’d figured a few things out over the years, but much of it was contradictory and nonsensical. Still, he relaxed a little, no longer on edge.

“Well, let’s start with you being able to touch people and them able to touch you.” As if experimentally, he placed his hand on Elijah’s. “You’re cold. Are you always cold, or is it the weather?”

Elijah cleared his throat. This was the first human touch he’d had in years, and it affected him more than he’d ever imagined. Not that he’d spent a lot of time wondering because he’d assumed it’d never happen. Should he have tried earlier, or was it, as he suspected, only this man?

Cautiously, he curled his fingers, holding on tighter.

“As for temperature. I don’t understand. I don’t feel cold now, and I don’t feel hot in the summer. And summers around here can be brutal, despite how far north we are.”

Callum nodded. “Edinburgh, where I’m from, can get warm in the summer. But we’re closer to the northern point of the country, so it’s temperate as opposed to oppressive.”

His thumb caressed the juncture where Elijah’s thumb met his finger, and little zings shot through him. Like the sound he associated with the electric lights when they turned on at dusk. Of course, the whole concept of electricity was beyond him.