I have the wonderful opportunity to have talented author J.C. Daniels (who is also known as Shiloh Walker) visiting with me twice this month.  Today, we are showcasing that deliciously intense addition to the Colbana Files, Broken Blade

J.C. agreed to answer a few questions in her delightfully laconic way...

ELF:  What fact most surprised you when you did research for this book/series?
JC:  That would be kind of hard to answer.  I don't research for UF books the same way I'd research for my RS books.  I look for things I can twist up or myths that are already twisted, so to speak.

ELF:  What tv show is your guilty pleasure?
JC: I don't watch much TV and I don't tend to do many guilty pleasures, so to speak, unless it's chocolate.  But I adore Sleepy Hollow and S.H.I.E.L.D.  That's about all I really watch these days.  I'll get on a kick where I rewatch Buffy the Vampire Slayer sometimes.

ELF:  What can readers do (besides buying your books) to show their appreciation for your stories?
JC: Well, buying them is excellent.  Reviews on retail sites help a lot.  Publishers look for those things and it matters quite a bit.   But if a reader takes the time to buy my book, that right there means the world to me.  It's what makes it possible for me to do this, to keep doing it.  Without readers buying my books, I couldn't keep doing it. :)

ELF:  What one thing do you want readers to remember most about this book?
JC: I never promised there would be an easy road for Kit.  I plan on making her happy in the end, but first she has to figure out who she is.

ELF:  Who is your newest favorite author and why?
JC: Um...I dunno.  I'm reading Meridian Six by Jaye Wells and enjoying it a lot.

ELF:  What is on your current playlist?
JC: Too many to count. I love Daughtry and a ton of their music is on my playlist.

ELF:  What is the next title on your TBR list?


JC: That implies I actually organize things.  I'm more helter-skelter than that.  Maybe J.D. Robb.  It's a toss up between her and Victoria Dahl.

ELF:  What would readers be surprised to know about you?

JC: I really don't know.  One little known fact... I've attended the same church for almost thirty years.  It's the same church where my guy and I got married, seventeen years ago.

Kit Colbana: assassin, thief, and investigator extraordinaire. Now broken. She always expected her past to catch up with her but never like this. Haunted by nightmares and stripped of her identity, she’s retreated to Wolf Haven, the no-man’s land where she found refuge years before. But while she might want to hide away from the rest of the world, the rest of the world isn’t taking the hint.
Dragged kicking and screaming back into life, Kit is thrust head-first into an investigation surrounding the theft of an ancient relic...one that she wants nothing to do with. Her instincts tell her it’s a bad idea to just leave the relic lying about, but finding it might be just as bad.
Forced to face her nightmares, she uncovers hidden strength and comes face to face with one of the world’s original monsters.
If she survives the job, she won’t be the same...and neither will those closest to her.

He slid me a dark look. “Go ahead.” Shoving away from the shower, he came closer. Violence, danger and anger radiated from him and fear pulsed inside me, despite the fact that Iknew, deep inside, that he wouldn’t hurt me. Damon was one of the few people who was safe.

Too bad my body didn’t get that message.

He reached up and my breath froze in my lungs as he slid a hand inside my vest. The back of his hand brushed against my breast and the black band of terror grabbed me, held tight.

“You’re so fucking afraid now, Kit,” he whispered, dipping his head to murmur into my ear. “It’s killing me.”

Then he lifted his head and reached down. He caught my left hand and pushed one of my knives into it. “Bloody me.”

I jerked my hand away—or I tried. He still held my wrist and he wasn’t letting go.

“That’s a silver blade, you son of a bitch.”

“I know.” He guided my blade to his chest, his grip relentless.

“Bloody me. I’d feel better for it. And if it would do something to take that fear away...”

About JC:
J.C. Daniels is the alter ego of author Shiloh Walker and was created basically because Shiloh writes like a hyperactive bunny and an intervention was necessary.  J.C. is the intervention.  The name… J.C. Daniels is a play off of the three people who pretty much run Shiloh’s life.

J.C./Shiloh Walker has been writing since she was a kid. She fell in love with vampires with the book Bunnicula and has worked her way up to the more…ah…serious works of fiction. She loves reading and writing just about every kind of romance. Once upon a time she worked as a nurse, but now she writes full time and lives with her family in the Midwest.  She writes urban fantasy, romantic suspense and paranormal romance, among other things.

The other books in the series:

One winner from this tour will win a Kit & Damon goodie bag which will include a silver cuff bracelet inscribed with a quote from Shakespeare  "Though she be but little she is fierce..."
https://www.etsy.com/transaction/168292430?ref=fb2_tnx_title 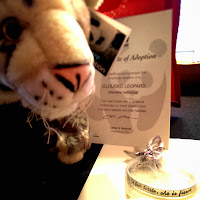 A clouded leopard stuffed animal, along with a clouded leopard 'adoption' via World Wildlife Foundation-the donation will help support the WWF's conservation efforts around the world.
http://gifts.worldwildlife.org/gift-center/gifts/Species-Adoptions/Clouded-Leopard.aspx

Please use the Rafflecopter below for entries

Broken Blade by J.C. Daniels (Shiloh Walker) continues the story of Kit Colbana as she struggles to recover from the horrific events that took place in “Night Blade” (the second story in the ‘Colbana Files’ series).  So many aspects of Kit’s life are broken but as her friends struggle to convince her that many things can be repaired, she is unable to believe them even as she slowly tries to pick up the shattered remnants of her life.  Accepting a case that requires her to interact with those she would rather avoid causes her to become involved in a struggle that turns a well-known myth on its end and has far-reaching implications for witches, aneira, were and vampires as well as the offshoot races.  The assignment may end up costing far more than Kit wants to pay but it also may be just what she needs to start on her road to recovery, if she survives long enough to try.

This intense urban fantasy series has provided a serious crucible for its main character to undergo and it was difficult to read about what Kit experienced in the last book.  Understandably, she feels broken and isolated from those who care about her but she slowly has to start accessing that inner strength that was honed during her abusive upbringing.  It is tough to follow her slow climb from the depths of despair but the case that is foisted upon her does an excellent job of mobilizing her allies while forcing her to face her new realities even as it uncovers some mind-boggling facts.  It definitely would be advised to read all of the books in the series so that appropriate background is available but probably best if one has a couple of days put aside because this mesmerizing storyline makes one race to the finish of each book and impatiently await further developments.  The title of this gripping story is “Broken Blade” but fortunately, the descriptor should be ‘badly damaged’ but hopefully repairable and persevering.  This was an excellent addition to the series and provides even more mysteries to be solved and I impatiently look forward to reading the next installment.