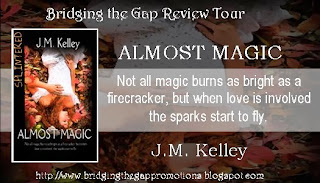 Blurb:
When it came to Vivian Burroughs’ unique connection with nature, her grandmother always said, ‘Mediocrity may not burn as bright as a firecracker, but it seldom blows up in your face.’ But the old woman never advised her on what to do when a sexy new neighbor stokes the flames of attraction.

Jack Riley, a still-grieving widower, relocates from the big city to small-town Essex Woods with his young daughter, Elizabeth. His introduction to Vivian leaves him enchanted, but rumors regarding her abilities soon come to light. Is the local beauty a witch or merely the product of an eccentric upbringing by her mother Fred and Aunt Lil, identical twins with a penchant for mischief?

Jack is intrigued by the mystery surrounding the woman, considering the complexities of raising the precocious Elizabeth, a child with frighteningly accurate intuitiveness. As he reluctantly draws closer to Vivian, he also discovers how deep his daughter’s gifts run. Can Jack accept the truth about his own flesh and blood, as well as a second chance at love?


Excerpt:
Vivian strolled down her street, reveling in the warmth of the sunny June day after a long week of rain and gloom. “Morning, Mrs. Andrews,” she called.

“Good morning, Miss Burroughs.” The older woman grunted as she stooped to pick the morning paper from her driveway. “Dumb paperboy can’t just toss it on the porch, can he?”

Vivian laughed. “Would any of us know what to do, if our paper was ever where it should be?”

“I guess not.” Mrs. Wagner waved the paper at Vivian. “Enjoy your day, Vivian.”

“I intend to.” Vivian continued on. As she crested a gentle hill, she stopped surprised by a flurry of activity at the old Wentz cottage. Piles of boxes sat outside the garage, and a small crew of movers scurried around a small truck parked in the driveway.

She approached the property, but slowed her pace when a silver Honda pulled up alongside the curb, and a man and a young child emerged. The little girl was a blur of white-blonde curls as she bounded from the car and ran straight for the silver maple, its low branches stretching over the yard.

Oh, the girl with the petals.

The air around the girl shimmered with her energy, and Vivian smiled as she recalled her first glimpse of her during the May Day Celebration. An aura like hers was not easy to forget. Auntie Lil was right. You did need sunglasses to be in her presence.

The little girl hauled herself onto the lowest tree branch, despite her frilly dress and patent leather shoes. In seconds, she disappeared into the green cover of leaves.

“Elizabeth, if you fall out of that tree and scrape yourself up, you’ll bleed all over your dress and won’t have anything nice to wear to your…appointment,” the man shouted as he walked toward the edge of the property.

Vivian laughed out loud, covering her mouth when the man glanced her way with a raised eyebrow.

“She’s in this fairy princess stage,” he said with a sheepish lift of his shoulders. “I’m glad she’s getting some mileage out of that dress. She was in a friend’s wedding last December, and she’s already outgrowing it. She wears this get-up on days she announces there’s an important fairy meeting to attend.”

Vivian nodded, as if the explanation made perfect sense. “Fairies are quite insistent upon formal dress for their meetings. The consequences for casual attire are severe.”

“Nice to meet you, Jack Riley.” Vivian took his extended hand and smiled at his firm handshake. “I’m Vivian. I live down the street.” She pointed in the direction of her own home. “I assume I should be welcoming you to the neighborhood?”

Vivian’s breath hitched in her chest as her eyes slid over Mr. Riley’s frame. He was tall with red hair and wore wrinkled khakis and a light blue shirt, with the top two buttons open and the sleeves rolled up to his elbows. Sunlight glinted off the golden hair of his strong forearms. Her eyes lingered on his broad shoulders, and came to rest on the dusting of pale freckles on his forehead. She was such a sucker for the boy next door look, especially when it really was the boy next door.

The heat of a flush crept up her neck when she realized his awareness of her inspection. When she dared to make eye contact once again, admiring the brilliant shade of green, she realized his eyebrow was arched again and a bemused smirk played on his lips.

“Everything all right?” he asked.

Oh, boy. Busted. Vivian made a sound of assent and her eyes lingered on his short, copper hair. “I was just thinking there’s something familiar about you. Were you at the May Day Celebration last month?”

“Ah, yes.” Jack gazed at the tree. “The catalyst for all this chaos. My daughter fell in love with this town after the shindig.” One foot dangling below the canopy of leaves was the only evidence that his daughter was still somewhere in the branches. “Elizabeth, I’m warning you. Don’t go any higher. Not in those shoes. You’ll break your.…”

“Are you okay?” Vivian asked when his face turned ashen.

Jack shook his head and squeezed his eyes shut. “I almost said something pretty stupid.”

“Oh.” Vivian frowned. What could be so stupid, and why did he look so stricken? There was sadness in his eyes that tugged at her heartstrings. She opened her mouth to ask for more details, but realized he might perceive her questions as being too nosy. She hazarded a peek at his left hand—he wore no wedding ring.

“Is there a Mrs. Riley?” she blurted out. Uh oh. Dumb question.

“Oh, I’m so sorry.” Vivian reached out and touched his forearm, but jerked her hand away when Jack looked down at it with wide eyes. “Hey,” she said, stepping back. Her fingertips burned almost as hot as the tips of her ears. “You’re busy. I’m sorry for disturbing you. I’ll let you go.”

“No.” Jack stepped toward her, closing the distance. “I apologize.” He gestured toward the house. “This move…well, this is a huge step for Elizabeth and me. I think I’m a little overwhelmed. Big changes, after all.”

“I can empathize.” Vivian said, smiling. “You picked a great location though. Most of your neighbors will roll out the red carpet for you. If you need anything, all you have to do is knock on any door and you’ll find help.”

“Sounds terrific,” Jack said. He cleared his throat and shuffled his feet. “How about I knock on your door?” It was Vivian’s turn to quirk an eyebrow. “I mean, if I need something. A cup of sugar, directions to the grocery store. That kind of thing.”

“Of course,” Vivian exclaimed. Her voice hit a shrill pitch she didn’t know she was capable of achieving. “I live at the top of the cul-de-sac, in the blue house. The obscene amounts of flora and fauna will serve as your landmark.”

“Thanks.” Jack ducked his head, and she was pleased by the flush that reddened his cheeks. “You have a good day, Vivian.”

“You too, Jack.” She began to walk away but paused when Elizabeth dropped from the tree and waved.

She glanced at Jack, who wore a confused frown on his face.

“How the heck did she know your name?” he asked. “She couldn’t have overheard us all the way over here.”

“Guess she did,” Vivian said, her lips curving upward as she waved back to Elizabeth. The brilliant aura she possessed might not be the only special thing about the girl.

Three years ago, native Pennsylvanian J.M. Kelley packed her bags and moved south. Now, the wannabe Carolina Girl can’t speak a single sentence without adding the word y’all at the end of it, and regards a blast of snow flurries as a doomsday-level event.  When the day job allows, and when she can pull herself away from George Takei’s Facebook fanpage, she likes to go on writing jaunts to her favorite lake, or a local coffee shop with delicious shakes and questionable Wi-Fi connections.

J.M. Kelley is a proud recipient of a Carrie McCray Memorial Literary award, and is a member of The South Carolina Writers Workshop and Romance Writers of America (PAN).

by J.M. Kelley is a sweet fantasy romance that centers around widower Jack Riley who has moved to s small town called Essex Woods with his adorable daughter, Elizabeth.  Still haunted by the tragic loss of his wife, Jack is ill-prepared to cope with the mysteries surrounding his attractive neighbor, Vivian Burroughs, especially when rumors of witchcraft are whispered about her and her mom and aunt.  Unfortunately, Vivian realizes that there is far more to the charming Elizabeth than Jack is quite prepared to cope with and her interference, no matter how well-intentioned, inevitably has negative consequences.  It will take more than meddling from Vivian’s well-intentioned relatives to overcome the obstacles which guard Jack’s heart but fortunately, there is plenty of magic to call upon in their sleepy town, both real and imagined.

This delightful story combines a contemporary setting with mystical elements to create a lovely romantic tale.  The intriguing concept of guilt personified is contrasted with the concept of telepathy and its impact on the unwary.  The wonderful depiction of a caring father who is somewhat out of his depth but gamefully trying to cope with the burden of responsibility of raising a somewhat precocious daughter provides a heart-tugging tale that is leavened by the entertaining antics of two elderly woman who want the best for their own beloved relative.  I love the aura of small-town life that is depicted in this feel-good story with its combination of humor and emotion and look forward to reading other works by this talented author.