HRR #3 (Historical Romance Retreat)...Swag! Plus the tale of the (semi)authentic crossed lines by Alanna Lucas 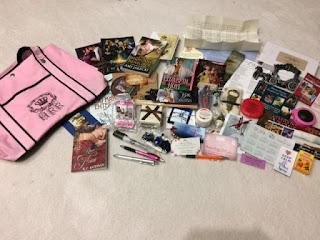 And finally, one of the other fun reasons to attend a Readers' Day at one of the book conferences--SWAG! Authors are only limited by their imaginations (and their budgets) and have all kinds of things to tempt you to visit their table (as if the sizzling covers aren't enough, lol).

The lovely pink bag was given to the first few people (maybe it was 50...all I know was...I got one!). One of the attendees gave me her copy of Elizabeth Hoyt's book and Amy Jarecki shared her upcoming ARC for me to review. The rest was obtained as I browsed the tables. 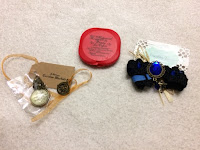 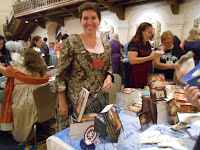 While I was at HRR, I got a chance to take a picture of the lovely Alanna Lucas and in her swag was a folded letter. As a fan of regency romances, I'd become familiar with the concept of letters with crossed lines, but I always pictured them as written in one orientation then turned upside-down and continued between the lines that had been originally written.

I had the opportunity to chat with Alanna at the Reader Rave at the In D'Scribe conference last week (after she had worked tirelessly at the luncheon to make sure things went smoothly) and she explained that this was one of the less common methods. In a later post, I will explain the painstaking efforts involved in providing her fans with an example of a letter with crossed lines...let's just say, I have no doubt that her novels are well researched after hearing the lengths she went through to provide this as swag! 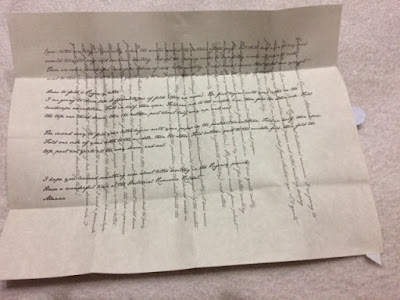 Here is a picture of the letter unfolded. I left it relatively large so you can get an idea of what it looked like.


Here are a couple of sites that I found when I looked for an explanation of the process...

As you can see, there were lots of neat things to collect in addition to the wonderful opportunity to chat with the authors. Again, if you ever get the chance, attend the readers' activities at a conference near you if at all possible! It's so much fun to connect with the "tribe" and authors are delighted to meet new fans and old ones!