That guy—the one that most girls would run away from—captured Kara’s attention and wouldn’t let it go. As expected, he turned out to be a player. So she cut him off.

But he wasn’t done with her yet. He waited until the memory of their start would have been forgotten—at least, softened a bit. Then he returned to her life, and captured her heart.

Finally blissfully happy, they fall in love and decide to make it official…until his past catches up with him and he destroys her again. But this is it…this is the last time she’ll fall for him.

And she keeps telling herself that until she almost believes it.

This book is for mature audiences.


A few minutes later, I heard the door open again.


“That was quick,” I said while shuffling cards, not paying attention to Anna’s return. But it wasn’t Anna. It was Naheed…he walked around the corner, and leaned next to me, putting a hand on the back of my chair.


“You forgot your drink,” he said, setting the drink down in front of me while keeping his hand on the back of my chair, essentially enclosing me in his arms.


“Thank you.” I felt the heat emanating from him and I know my face was bright red. I couldn’t breathe. Butterflies were storming around my stomach.


“You’re welcome. Aren’t you going to even say hello? You’re acting like I’m a stranger.”


“Hello,” I said. I haven’t even looked at him yet. I was avoiding that like the plague. I knew our eyes would lock, just like they used to…and I can’t let this get out of hand.


A slight fit of anger made me look up to Naheed; he’s still standing incredibly close to me.


“Ah, how ironic. That’s what my friends said about you.”


“And you still have a girlfriend…so, I guess things ended up the way they were supposed to.”


I got to him; he looked pissed. He was quiet for a minute…then sat in the chair next to me.


“Kara, I’m with her because you walked away. YOU WALKED AWAY from us,” he said loudly. 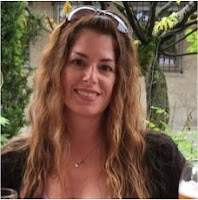 Vivian Kohlman writes romance novels based on stories of love and loss under the backdrop of Washington, DC. She grew up in Maryland just outside DC, but lived in Los Angeles on and off in her 20's before returning to the Washington, DC area to live out her adult life.

Vivian attended a private university in Washington, DC for undergraduate and graduate school, and lived a very active social life. During her teens and twenties she and her friends lived through a lot of ups and downs—these experiences have fed the stories of this series.

Currently, she loves to travel with her husband and reads or writes romance novels as often as she can. When she’s not writing, she works a fulltime job and enjoys all of the bars, restaurants, and other hot spots of the nation’s capital. Born and raised in the DC metro area, she adores the culture of the city and is passionate about highlighting the city's attributes, lifestyles, and norms—not including politics.