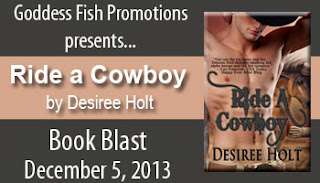 Back In The Saddle

Kink is a mild term for the kind of sex Chance McDaniel enjoys. But he's learned the hard way not all women can handle his darker desires. He aches to give Molly the ride of her life but fears she'll shy away from his wilder ways.

Will the past become a stumbling block or will both Molly and Chance, once wounded, climb back in the saddle?

Jessie Wade is a tough as nails sheriff until bull rider Kyle Mitchell ends up in her jail. With his bone-melting good looks and seductive voice, he knocks Jessie's defenses down one by one and awakens the sensuous woman she's hidden beneath her uniform. But Jessie can't afford to be soft. Or allow herself to fall for a cowboy who's never in one town longer than it takes to ride a bull.

Kyle never backs down from a challenge, but after a passionate night with Jessie, he realizes there's a hell of a woman behind the handcuffs and badge. Can Kyle convince Jessie he can take her for more than an eight-second ride?

Kyle Mitchell wanted to pry his eyes open but someone was pounding a drum inside his head so hard he was afraid to see daylight. Not only that, but whatever he was lying on was harder than a concrete floor and killing his back. He needed aspirin and coffee in large supply. He tried to raise his hands to press them against his aching temples but something jerked his right hand and prevented him from lifting it. Now he opened his eyes. And wished he hadn’t.

Unfortunately this wasn’t the first jail cell he’d been in, but he was pretty sure it was the worst. And he was pretty sure it hadn’t been modernized in the last fifty years. One wall consisted of the usual arrangement of bars with a portion of it hinged for a door. The sleeping arrangement, rather than a crummy cot that would have been a vast improvement, was a flat piece of wood with a mattress on it so thin he was sure he’d be able to see through it. And it was the kind that pulled down from the wall on chains.

And speaking of chain, he yanked at his right hand again and discovered he was handcuffed to one length of chain.

Damn! What the hell had happened? What had he gotten himself into now?

Squinting against the brightness of the light from the ceiling lights he looked down the length of his body.

He clapped his left hand over his waist in a sudden panic.

He rubbed a hand over his square jaw, feeling the stubble of yesterday’s beard growth. Testing everywhere on his face he discovered his nose was tender but not broken, but the rest of his face felt as if a bull had stomped on it.

Wait. Was that what had happened? The last thing he remembered was lasting the full eight seconds on Sodbuster before landing in the dirt of the rodeo arena. Everything else was a blur.

The voice was pure music, soft, with a faint drawl. Squinting through the bars he thought for a minute his heart was going to stop beating. In the hallway looking in at him was about five-foot-four of the most breathtaking woman he’d ever seen. Dark blonde curls tumbled down to her shoulders, framing a lightly tanned face with emerald green eyes peeking out from thick, thick lashes. The stiff fabric of the uniform shirt she wore couldn’t conceal the lush ripeness of her breasts any more than the pants hid her mouthwatering curves.

But what really shook him up was the star gleaming from its place of prominence on her shirt, right over one of those nicely rounded breasts.

Holy hell! This was the sheriff?

He looked at her and something inside turned over. He had an urgent need to see this woman naked in his bed, but not the way he did with the usual women he rolled in the sheets with. Not an eight-second ride and done. No, even in his pitiful condition he could imagine making slow, soul-searing love to her. Everything from his balls to his brain went on instant alert.
Ride A Cowboy (Amazon link)

Back in the Saddle centers around Molly Hayes who is recovering from her failed marriage and ready to move on.  Her youthful love for Chance McDaniel has matured into a woman’s desires and he has his own memories of a broken marriage to overcome.  Fortunately for both of them, they have both grown bold enough to explore their sensuality and Chance has quite a few tricks up his sleeve to keep Molly curious and satiated.

Eight Second Ride features bullrider Kyle Mitchell who has run afoul of Sheriff Jessica (Jessie) Wade due to his drunk and disorderly conduct in her town.  He is penitent as he explores his attraction to the sexy sheriff but he never expects her to use her handcuffs in the bedroom as well as on the job but she’s not sure whether she wants to keep the man who starred in her own fateful eight second ride.

Both of these very sensual novellas showcase Ms. Holt’s fantastic ability to pen a scorching hot tale peopled with lovable characters.  The western theme enhances the stories which feature sexy men and the women who complement them but my only complaint is that I want more!  I would love to see what else happens in their lives and can only hope that they will all appear in additional stories.

Known the world over as The Oldest Living Erotica Author, Desiree Holt proves every day that she is more than the sum of her years and more than the grandmother who plays with Barbie and Ken dolls: She is The Hardest Working Erotica Author, producing one novel or more each month—and sending her readers and reviewers into rhapsodies about her five star storytelling.

How did she become so prolific? She counts innumerable rich experiences in her long life, including years in the music business representing every kind of artist from country singer to heavy metal rock bands. For several years she also ran her own public relations agency handling any client who interested her. Many did. Many became genuine characters whom she refashioned as heroes and heroines to live within the pages of her novels.

“Desiree Holt is the most amazing erotica author of our time and each story is more fulfilling then the last.” (Romance Junkies)

Learn more about her and read her novels here:

Also on LinkedIn and Google+