It's Always Been You by Jessica Scott (spotlight, excerpt, GIVEAWAY, and review)


She plays by the rules . . .
Captain Ben Teague is many things: a tough soldier, a loyal friend, and a bona fide smart-ass. He doesn't have much tolerance for BS, which is why he's mad as hell when a trusted colleague and mentor is brought up on charges that can't possibly be true. He's even more frustrated with by-the-book lawyer Major Olivia Hale. But there's something simmering beneath her icy reserve-and Ben just can't resist turning up the heat . . .

. . . and he's determined to break them
The only thing riskier than mixing business with pleasure is enjoying it . . . and Olivia can't resist locking horns-and lips-with Ben. He's got more compassion in his little finger than any commander she's ever met, a fact that makes him a better leader than he realizes. But when the case that brought them together awakens demons from Olivia's past, she will have to choose between following orders-or her heart . . .

The memory of that kiss made him crave another taste of her. He’d thought she was fire and passion and so damned determined before. Now he knew that quiet energy she directed toward work was merely a hint of the passion concealed beneath that cool exterior.

“Hey.” He swallowed, about to cross a line from professional to… something else.

And damned if he wasn’t afraid to cross that line. That kiss earlier was nothing compared to what she’d just given him.

She’d lied for him today. Ben had been about to make something up that would get his battalion commander off his back and Olivia had stepped in with a smooth story that had deflected Gilliad’s attention with no one the wiser.

She’d agreed not to tell the boss. He hadn’t expected her to all-out lie for him. And now that she had? He didn’t quite know how to broach the subject with her. Not at all.

She straightened and leaned against her desk. The broken scale tray swayed as she bumped it with her hip. He grasped at it for a distraction from his racing thoughts. “You know one of these is broken?”

She nodded. “It’s supposed to be.”

Ben paused, studying the soft bun at the nape of her neck. Her skin was exposed. Her neck was long and lean. He had the sudden image in his head of dragging his tongue down that tender flesh. Would she gasp? Would she tip her head and grant him access to more of her secret places?

He cleared his throat roughly. “You lied for me today.”

She stilled, guilt flashing over her face. “Yeah, about that…”

“Thank you,” he said quickly.

She lifted one brow. “For lying?”

“For giving me the benefit of the doubt. That doesn’t happen very often,” he said quietly.

“Really? But you’re such a charmer.”

Ben shifted until he stood a little too close. Until he could see her eyes darken the way they had in the car when he’d given in to the temptation to kiss her. “Are you teasing me? Because if you are, I think I need to make a note on my calendar that yes, you do officially have a sense of humor.”

A smile crossed her lips. It took everything he had not to slide his thumb over that soft skin. He wanted to see her lips close over the tip. To feel her warm mouth encircle him and… Jesus, he still had to go back to work.

“I do have a sense of humor. I just don’t get to break it out very often because the only thing I see at work is the seedy underbelly of the army. There’s not much humor in what I do.”

“Maybe you need to relax a little more.” Ben shifted until he could nudge the door shut behind him. He didn’t want anyone to see. Didn’t want to give anyone a hint of something that was private and intimate and deeply compelling. Were they flirting? This felt like flirting. And with this woman, he had absolutely no basis to say either way what this really was.

“I don’t know what this ‘relax’ is that you speak of,” she said.
He felt a long-forgotten twinge deep in his belly. It was something so foreign, he’d forgotten it was something he was capable of. In all his casual encounters, he’d forgotten what real attraction felt like.
He swallowed the dryness in his mouth. He didn’t know what to do with this realization that Olivia Hale was someone he wanted to… someone he wanted. It was one thing to flirt with someone at a bar, to take them home for a few hours of mindless sex.

This? This was something entirely different.

Something more than wanting a few hours of sheets sliding over skin, of warm bodies slipping together. This was something darker.

“Maybe I’ll ply you with alcohol tonight at Stable Call. We’ll see if we can’t get you to unwind a little bit.” His voice was low, grating on his ears.

“Good luck with that. I only drink socially. There will be no drunken pictures of me immortalized on the Internet.” She stepped toward him then, closing the last distance between them. She reached up and slid her hand over his cheek. Ben went very still as her palm slid over his skin. Her palm was cool against his face. Gentle. It took everything he had to let her slip out of reach again.

He captured her palm before she could slip away. Held it there against his cheek. “Thank you,” he whispered. “For Zittoro.”

Her lips parted. He could feel the slight huff of breath on his skin.

“Thank you for trusting me with the truth.” She slipped her fingers from his, her eyes sparkling. “Just don’t make me come after you for that packet.”

Ben caught her hand before he thought about it. His hand closed over hers, her index finger captured in a gentle loop between his thumb and forefinger.

He had the sudden wild idea to put her finger to his lips. He pressed it gently to his mouth. Felt the pad of her finger on his bottom lip.

A single bolt of electricity snapped over his skin.

A simple touch. Nothing more.

They were at work. It was the single stupidest thing he could have done.

He released her quickly, before anyone could see. Before he could do something stupid like pull her close and kiss her again. The want inside him was powerful. Raw and needy.

Buy Links:
It's Always Been You 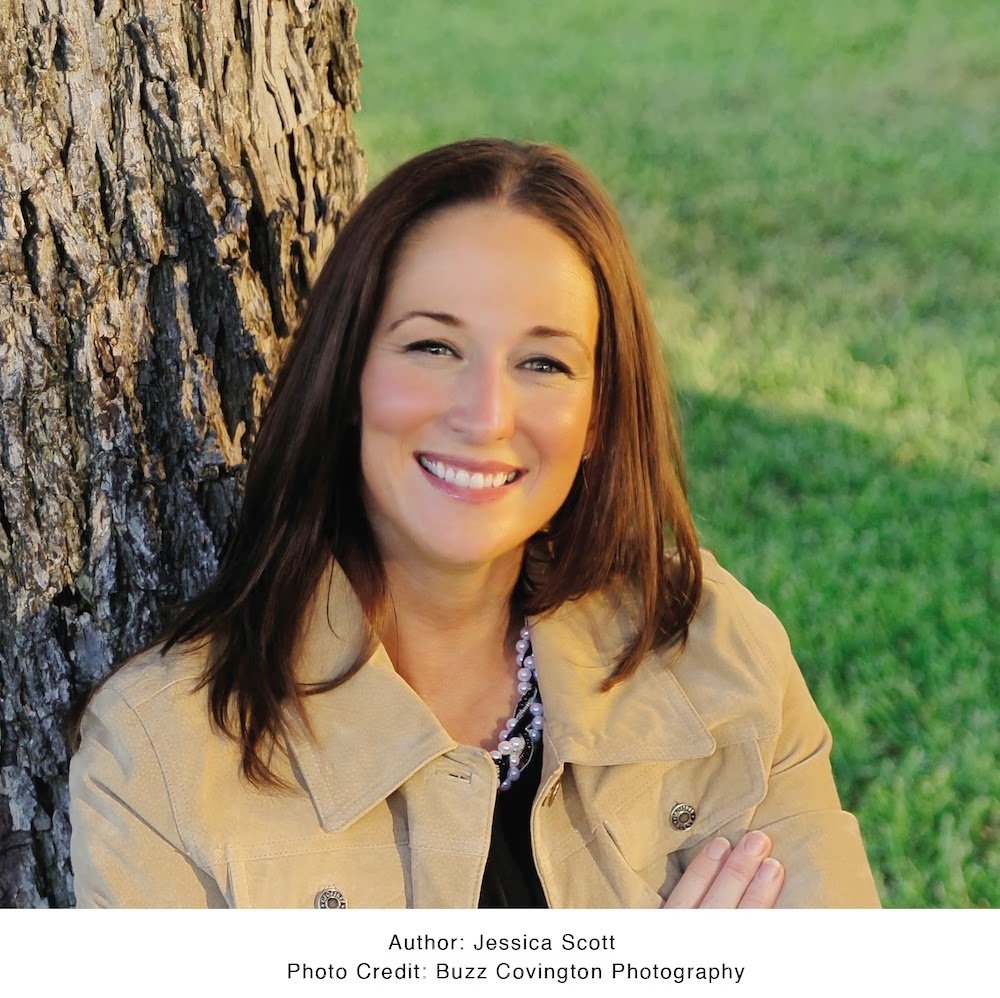 USA Today bestselling author Jessica Scott is a career army officer; mother of two daughters, three cats and three dogs; wife to a career NCO and wrangler of all things stuffed and fluffy. She is a terrible cook and even worse housekeeper, but she's a pretty good shot with her assigned weapon and someone liked some of the stuff she wrote. Somehow, her children are pretty well-adjusted and her husband still loves her, despite burned water and a messy house.

She's written for the New York Times At War Blog, PBS Point of View: Regarding War Blog, and Iraq and Afghanistan Veterans of America. She deployed to Iraq in 2009 as part of Operation Iraqi Freedom/New Dawn and has served as a company commander at Fort Hood, Texas.

She's pursuing a PhD in Sociology in her spare time and most recently, she's been featured as one ofEsquire Magazine's Americans of the Year for 2012.

It's Always Been You by Jessica Scott is part of the military romance ‘Coming Home’ series and features Ben Teague who has been thrust into the unwelcome role of command during the attempt to ‘clean house’.  He must deal with both the pressures of the job and the complication of making unwelcome decisions about men he has shared life-threatening experiences with.  Major Olivia Hale has been tasked with making sure that the legal requirements and appropriate paperwork are completed, no matter what resistance.  It takes some patience and compassion for her to realize that her own past history and individual biases must be overcome and that sometimes what is protocol is not necessarily what is humane but the challenge is knowing when and how to apply the rules.

The allure of this series is the gritty realism that is balanced by the hope that a change can be made for the brave soldiers who are sacrificing so much.  Each book is eye-opening as it reveals the challenges that are faced both on and off of the battlefield and the repercussions of decisions that are made for the masses yet impact on very distinct individuals.  The heartbreaking aftereffects of military action and the long-lasting impact on soldiers and their families is again emphasized and adds to the poignancy of a story that allows the reader to learn about some of the harsh reality facing those who develop addictions or suffer from traumatic brain injuries or PTSD that go untreated.  The gradual blossoming of the relationship between Ben and Olivia who each have their own past traumas to overcome is wonderful to watch and it is great to get a glimpse of Reza and Emily as well.  I love the camaraderie that is displayed even as I mourn the challenges that all of these individuals must overcome and applaud their perseverance and loyalty to each other and those they are responsible for.  It is wonderful the way the stories in this series integrate and I am always anxious for more of them and hope that we get to see many more tales of these charismatic individuals.

Email ThisBlogThis!Share to TwitterShare to FacebookShare to Pinterest
Labels: Coming Home series, It's Always Been You, Jessica Scott, military romance