I have the pleasure of welcoming the author of Resurrecting Harry

today, as she shares us some of her thoughts (and celebrates the book's birthday)...and here's Constance Phillips:

Resurrecting Harry: The Mystery and the Romance of Harry Houdini 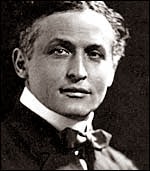 came out a year ago, I’ve been asked one question over and over: “Why write a romance novel about Harry Houdini?”

Can the greatest escape artist ever known break the grim reaper’s chains to save the only woman he’s ever loved?

In order to save Bess from self-destruction, Harry Houdini puts his afterlife on the line by entering a wager with purgatory’s keeper. He gives Harry a younger face and body, and a new name: Erich Welch.

Bess clings to his promise to deliver a coded message from beyond the grave, determined to provide the bridge for him to cross, even if that means befriending her husband's sworn enemy.

Erich needs to help Bess over her loss and put her on the road to healing, but will any good come from resurrecting Harry?

Being closed into the old steamer trunk didn't faze him, not even when the familiar sound of a padlock clanking in place echoed in his ear. When water began to seep through the seams, most men would panic, but years of experience pushed down the instinct. He knew his faithful assistant and wife, Bess, had slipped into the spotlight to distract the crowd and raise the tension, just like they'd practiced for hours and performed dozens of times.

While the fans anticipated the worst, he took a slow and measured breath and prepared for several minutes without oxygen.

Harry focused on his center from behind veiled lids and used every last bit of strength to extend his legs. The side of the trunk he'd carefully loosened the night before popped off, and the water now rushed in. With cuffed hands, he felt along the lid, guiding himself out. His hooked pinky swiped the key from beneath his tongue, but the metallic taste remained.

Lifting his legs, he made short work of the shackles binding his ankles and then arched his back, reaching toward the surface. In seconds, the cuffs securing his wrists fell away too.

All that was left was to break the surface and claim his reward. The roar of the crowd and Bess's loving arms were the only two things that thrilled him more than defying death. Her and his fans gave him the drive to succeed.

Light faded away, as if rain clouds covered the sun or as if he was sinking further away from his destination.

His world spun like a child's top. A pulse thumped in his ear and molten-hot blood pumped through his veins. Pure adrenaline fueled the glimpses of his past, which flashed by like the slides his brother, Theo, showed after every vacation. But Harry wasn't watching the events unfold; he relived the memories over and again.

The spinning stopped. He now hung upside down, wrapped tighter than a Christmas present. His Chinese Water Torture Chamber, a straight jacket and the stage of the Orpheum Theatre; Harry might as well be safe at home in bed. He'd free himself from the binds as soon as he pushed his shoulder out of joint.

With a pop, this faded to white too.

Shivers raked his body. In the distance, he could hear a doctor offering comfort and explaining to a sobbing Bess that hope was lost.

Harry saw nothing, just shuddered and listened. Icy water enveloped him; his neck rested on the frosty cast-iron tub. No matter how many times he relived it, he still believed his infection would clear and the fever would break. He may have stood in the shadow cast by the angel of death, but he still denied the inevitable. A burst appendix destroy the great Harry Houdini, master escape artist and expert showman? Never. When the lights fell on his final performance, something grander than illness would extinguish his flame.

Swallowing hard, he fought the quiver in his lips and tried to call out for Bess. Her touch to his cheek would provide the needed strength. The only vision that ever played out completely: he whispered her name and watched his own chest rise and fall for the last time.

The cold vanished, his pain dissipated, but the mental torture never ended. Over and over he experienced his greatest challenges, but not the successes. Never completing an escape and returning to Bess's embrace kept him lonely and devastated. What had he done to deserve such torment, and for how long would this agony continue?

Harry always believed in ashes to ashes. When his heart stopped, his mind would too. Anything else seemed impossible, but now he knew different. This was Hell.

But what of the fire and brimstone ol' man Thomas used to preach about on the corner?

As a child, Harry's sainted mother would rush him past Seventh and Main where the elderly man testified to the world. She'd whisper passages from the Torah and remind him his main concern should be this life. Despite his mother's dislike for the reverend, he taught Harry a valuable lesson that would stick with him his whole life: give people a show.

Would it disappoint the preacher to know that, despite what the scriptures said, Hell didn't torture the body with never-ending fires, but focused on the mind? Harry knew this was worse.

His stomach heaved to and fro. Bile bubbled in his gut and pushed its way up, burning his throat, but the relief vomiting would bring never came.

Why won't the spinning stop? Maybe because he allowed it to continue. Change comes from within. That's how he lived his life: for every action, a reaction. Why should death be different?

He tightened his muscles and stretched his body as taut as possible. "STOP!"

Spinning. Spinning. As if he was embedded on a reel-to-reel film and someone had pushed rewind, but he was through being held at someone else's mercy. Again, he ordered an end to the torture.

The loud clank of rusty gears grinding together sounded, and he felt whatever force kept him tied to this existence snap. His body plummeted and his arms thrashed; pleas turned to screams. Maybe there was something worse than the status quo. Falling faster now, he tensed his muscles and braced for the agonizing pain of hitting the ground.

Soft and comforting instead, like slipping into a feather bed and wrapping up in a patchwork quilt, he felt ground beneath him. And serenity. An end to his anguish? He opened his eyes and wondered if he'd see anything but his past. White padding adorned the walls and the floor, like he'd seen in those mental hospitals he toured while concocting his straightjacket escape.

But Harry wasn't crazy. He was dead.

The air shifted; the temperature rose. Sweat replaced the goose bumps that covered his arms. A body? Harry touched the flesh to make sure it was real. The image of a floating soul now shattered by this reality. Hot, humid air burned his lungs as he leaned against the wall and looked up into the ice-blue eyes of a stranger, who loomed a good foot taller than Harry and was wrapped in tight, black leather like the blacksmiths he'd known in his youth or the cowboys he'd first met out west. Long, black hair veiled the stranger's face. He lit a cigarette and threw his head back, inhaling deeply and giving Harry another look at those bizarre eyes. A shiver rode his spine. "My God."

A bubbling laugh erupted from the giant. "Not bloody likely."

A touching tale that delves into love, responsibility, loyalty, death and grief. I’m going to have to read more on Houdini now. Such a fascinating character! – Shawna Romkey, Author of Speak of the Devil

This charming tale of will make you laugh and cry. Told with such emotive candor we watch as Harry disguised as Erich learns about love, trust, and forgiveness. – Louann Carroll, Author of Gemini Rising

This book is truly one of the best love stories of the ages I have read. So touching. – Kriss Morton of Cabin Goddess

This is an old-fashioned love story with a ghost story kind of twist. – Katie O’Sullivan, Author of Son of a Mermaid

Constance Phillips lives in Ohio with her husband, two ready-to-leave-the-nest children, and four canine kids. Her perfect fantasy vacation would involve hunting Dracula across Europe with her daughter, who also digs that kind of stuff. When she's not writing about fairies, shifters, vamps, and guardian angels, she's working side-by-side with her husband in their hardwood flooring business.
Constance is actively involved in her local Romance Writers of America chapter (MVRWA) and the Southeast Michigan chapter of the United States Pony Club. When not writing or enjoying the outdoors, she loves reality television or can be found at a Rick Springfield concert (just look for the pink Converse high tops).

There will be 2 separate giveaways for this tour