Watch Out! It’s “That Moment When You Know It’s Love.”
Randi Alexander is Guest Blogging Today


Thanks so much for hosting me today, Elf! I have to admit to being a sucker for love. When a character realizes “he’s the one!” or “I can’t live without her,” I get rather slushy inside. When the scene is exceptionally well written, I feel this strange ache behind my heart. I love when that happens!

. It’s after they’ve gotten to know each other for a few months, have already had a misunderstanding, and are now sorting things out.

After you read the mushy excerpt, be sure to leave a comment for your chance to win an e-book and swag.

Book Blurb: Country music superstar/actor Chase Tanner has yet to be denied anything–and he’s never wanted anything or anyone more than gorgeous screenplay writer Reno Linden. So when the film they are working on is finally finished, Chase decides to turn up the volume on seducing Reno.
Reno Linden lived a quiet, rural life until she was thrust into the Hollywood scene when her book was adapted to film. Chase Tanner is larger than life, sinfully sexy and hell-bent on getting her into bed. Skittish after a failed wedding engagement, Reno risks the plunge into Chase’s arms, and is surprised that her good girl self can keep up with bad boy Chase.

Though Chase returns to his cowboy roots often, and Reno cherishes the time spent with him on his ranch, the two find their careers pulling them in different directions. Will their attraction survive the glitz and stress of fame?

Chase stood and stomped across the room leaving Reno sitting on the couch staring at his back. Suddenly, she felt the need for a drink.

When he turned to face her, he spread his feet apart, his hands fisted at his sides. “Last night, you wouldn’t let me explain, and I’m damn sure gonna set you straight now.” His low voice rumbled.

Reno swallowed, shaking a little inside. Not from fear, but desire. Something about the way he took control made her feel secure and…mushy inside. She didn’t expect him to grovel, but he came on surprisingly forceful. She hadn’t known that quality in a man before.

“The condoms were a gag. My drummer stuffed them in that drawer a couple months ago, and told me to use them all before filming ended.” His gaze locked with hers, his eyes shaded under his hat. “Did you see how many were in there?”

Reno opened her mouth to answer.

“All of them. I didn’t use any.” He stalked toward her. “You wanna know why?”

She just blinked and drank in his intensity.

He paused a second. “When I met you, I knew I’d found someone special. But I didn’t want to believe it at first. I had to test it, and poke at it, and stir it up some, but you’re real.” His brow furrowed, and his stared, unmoving.
“You’re as nice as you seem and as smart as they come, and you’re way too good for a hick like me.”

“Too good? No, Chase—” She stood and reached out her hand toward him, but he backed away.

“Let me get this said. I lose my concentration when you’re close.”

Reno clasped her hands in front of her. She wanted so badly to be in his arms, she pressed her knees together to keep from running to him.

“I’ve been lonely my whole life, Reno.” He paced across the small space. “I thought it would never end, but then I met you. Remember that first day we were introduced? We talked for an hour, and I couldn’t believe my luck.” He glanced at her. “You’re beautiful and your body is fantastic, but you’re a good person. And that’s what makes me crazy for you.” He turned away and strode to the bar, resettling his hat on his head.

Her knees turned to pudding and she sank to the couch, her head spinning from his admission. What was he saying? It sounded almost like…he loved her?

He leaned back against the bar, hands on the countertop, elbows bent.
“There hasn’t been anyone else since the day we met, Reno.” His eyes darkened, and his lips thinned. “You’ve got to believe me when I tell you how important you are to me.”

A cry escaped her lips. How could this be happening? All those months, she worked at being his friend, sensing he was as alone and lost in LA as she was. Recognizing that his fame put him out of her reach, she’d been okay with that. Now he wanted more? Was there any way to make it last? Their lives were so different. So many obstacles stood between them.

When she didn’t speak, he tipped his head down. “I’m not saying I expect you to feel the same, not right away, anyhow.” His voice changed, became unsure, and his words touched her soul.

Head to my website to read the entire first chapter. 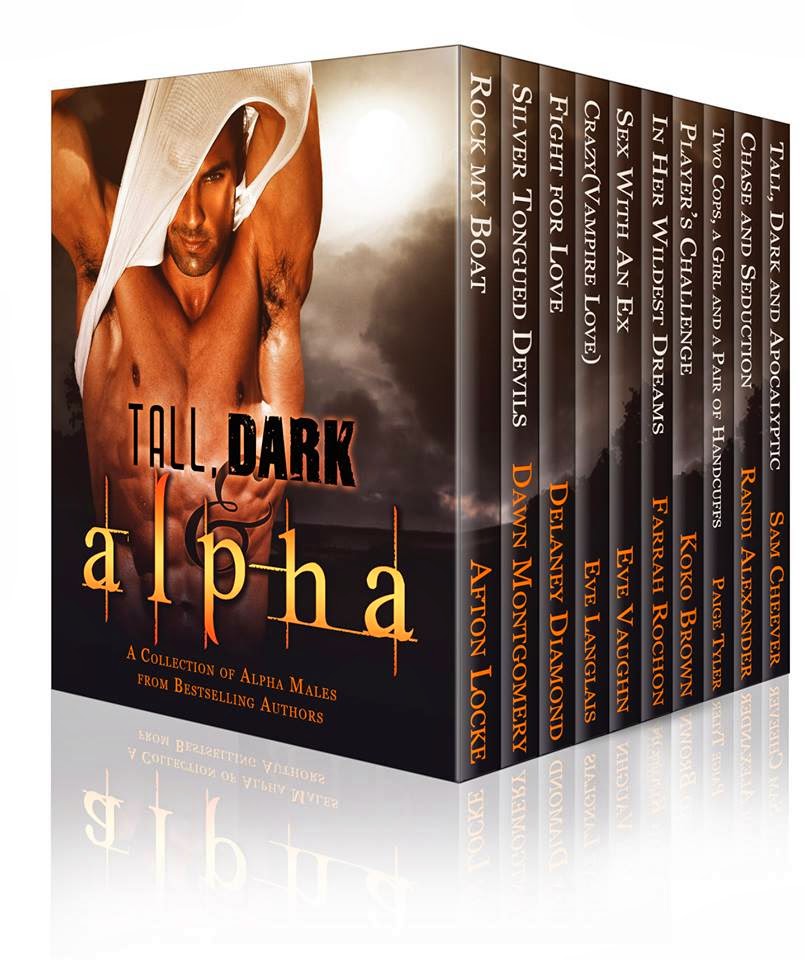 What is an Alpha Male? He makes your heart pound and melts your resistance away. He promises you a world of passion and you find it impossible to resist his dark charm. When he catches your eye across the room, you know he means business. He could be an executive, cop, shape shifter, or a bad boy looking for a little fun. Once he has you in his sights, you can't get away—and after one sizzling night in his arms, you won't want to. He’s Tall, Dark & Alpha. The alpha male is the ultimate indulgence…the richest dark chocolate…and we’re offering him to you in abundance.

Rock My Boat by Afton Locke: Rhonda Simms embarks on a cruise to create an ad campaign. Instead, she lands Simon Mann, a blue marlin shape shifter who will do anything to be human again. Will she let him rock her boat?

Silver Tongued Devils by Dawn Montgomery: Captain Na'varr and his executive officer, Brom, know they have a good thing when they capture stowaway hacker, Raesa, with her hot temper and dangerous curves. They want her, body and soul just as she wants them. But such trust endangers them in ways none of them can anticipate. Dare they risk it all?

Fight for Love by Delaney Diamond: Rafael Lopez, former professional wrestler and “Sexiest Athlete Alive,” is back and determined to hold onto the woman he lost, but still loves, and the son he never knew existed.

Crazy (Vampire Love) by Eve Langlais: Ella hears voices and they don’t like anyone. But not even poltergeists can stand in the way of a vampire in love.

In Her Wildest Dreams by Farrah Rochon : When Erica Cole, owner of "Your Wildest Dreams" event planning, requests his help in creating a Valentine’s Day fantasy date for her clients, chocolatier Gavin Foster sees it as the perfect opportunity to show her just how sweet their reality could be.

Player’s Challenge by Koko Brown: Sports agent Gemma Clarke must face the biggest challenge of her young career: represent her former lover and bad boy footballer, Devin Spencer. Their passionate love affair ended badly. Now he's back to prove to Gemma he's changed and convince her to give them one more chance.

Chase and Seduction by Randi Alexander: Country music superstar/actor Chase Tanner has never wanted anything or anyone more than gorgeous screenplay writer Reno Linden. To Reno, Chase is larger than life, sinfully sexy and hell-bent on getting her into bed. Reno risks the plunge into Chase’s arms, but will their attraction survive the glitz and stress of fame?

Tall, Dark and Apocalyptic by Sam Cheever: He’s a hunter in a world turned upside down. She’s his prey, a creature of dark magic. But the passion burning within them may be their undoing.

Are you ready to fall into the arms of the ultimate romance fantasies? Get your copy of this NEW exclusive limited edition box set of 10 decadent romances - including Chase and Seduction.
AMAZON US

Thanks for stopping by today! 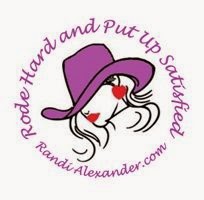 Thanks so much for visiting, Randi.  Randi is offering a giveaway today, please leave a comment about which of her heroes or heroines you have liked the best, or, if you haven't read one of her books (and what are you waiting for, hmm?) another cowboy or cowgirl that you are particularly fond of.  A winner who has left a valid e-address will be chosen on March 31, 2014 using Random.org.