A timid girl finds bravery as the first female Death.

Thirteen-year-old Suzie Sarnio always believed the Grim Reaper was a fairy tale image of a skeleton with a scythe. Now, forced to enter the College of Deaths, she finds herself training to bring souls from the Living World to the Hereafter. The task is demanding enough, but as the only female in the all-male College, she quickly becomes a target. Attacked by both classmates and strangers, Suzie is alone in a world where even her teachers want her to fail.

Caught in the middle of a plot to overthrow the World of Deaths, Suzie must uncover the reason she’s been brought there: the first female Death in a million years.

She tried to turn, but the scythe pulled her onward. She coursed through stars and space, beyond time and emotion. Lighter than a daydream, she slipped through a crevice: the gap between light and shadow. The blade twisted, finding its way.

A face appeared before her: an elderly man she didn’t recognize. Somehow, she sensed a name: Elias Stoneridge.

She landed hard, stumbling as her feet hit a tiled floor. Beads of white light trickled off the blade.

For a moment, she couldn’t tell where she was. She heard beeps and the slow intake of air.

Frank patted her on the shoulder. “You okay?” he asked.

“Remember, don’t let anyone else see us,” said Frank, looking around the hospital room.

Certified Deaths received special robes to help avoid mortal eyes. Ironically, the Deaths who’d inspired tales of the Grim Reaper throughout the ages had been students like her. Students and ones who didn’t make it back. She shuddered, remembering her skeletal appearance. It seemed long ago.

A man lay in a bed, connected to an array of tubes and machines. Suzie walked to the foot of his bed and read the name on his chart. “Elias Stoneridge.” The scythe quivered in her hand. The handle pulsed like a beating heart, or was that only her own heartbeat? No, the blade felt the soul, it was hungry.

“It’s his time,” said Frank, patting her on the shoulder. “Quickly, before someone comes.”

Muse It Up Publishing 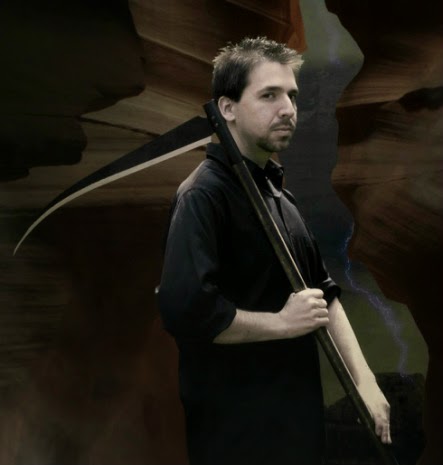 Christopher Mannino’s life is best described as an unending creative outlet.  He teaches high school theatre in Greenbelt, Maryland.  In addition to his daily drama classes, he runs several after-school performance/production drama groups.  He spends his summers writing and singing.  Mannino holds a Master of Arts in Theatre Education from Catholic University, and has studied mythology and literature both in America and at Oxford University.  His work with young people helped inspire him to write young adult fantasy, although it was his love of reading that truly brought his writing to life.

Mannino is currently working on a sequel to “School of Deaths” as well as an adult science fiction novel.

Email ThisBlogThis!Share to TwitterShare to FacebookShare to Pinterest
Labels: Christopher Mannino, Goddess Fish tours, Muse It Up Publishing, School of Deaths, YA Fantasy