Home Is Where the Heat Is, Book 2

As far as Chloe Garrison is concerned, Nick Westing was carved by the gods. Her one and only plan while visiting her best friend in Texas: get that sexy cowboy into her bed as often as possible until it’s time to return to New York.

After a whirlwind week she slips away, thinking it best to make a clean break. Except she can’t get Nick out of her head. And when he unexpectedly walks into her office, her first instinct is to find her defenses before she loses her panties.

Nick jumped at the chance to accompany his brother to New York for a photo shoot, but now that he’s here, he’s pissed. Seems Chloe is doing everything in her power to ignore him. The tender part of him understands her need for space.

The wilder side of him teases and torments her until she finally admits she’s missed him. Even though she walks away, in his book it’s a win. Because one way or another, he’s going to convince her they belong together.

His lopsided smile made Chloe’s stomach tighten with anticipation. “Well it’s too late now. You chose to throw down the gauntlet, and now it’s just you and me, cowboy. If you wanted to know how far I’d go, you should have just asked.”

The intensity of his gaze, ripe with undisguised promise, told her they’d both be winners tonight. Win or lose, Nick Westing would be a connoisseur in bed. Losing might not be the worst thing that could happen. Being at his beck and call—his servant—for the next twenty-four hours could prove ultra interesting.

Chloe groaned. The swap in drinks had been Shawn’s idea. Miya’s boyfriend was one of Chloe’s favorite people in the world, but after his suggestion that they switch to each other’s choice of drink every five minutes, she wasn’t sure she liked him at all. The only concession to choking down Nick’s choice of whiskey was watching him pucker up on her sweeter, mixed shots.

“Whiskey it is,” she conceded.

The muscles in her arms were beginning to tingle with exhaustion. She had to find a way to throw Nick off balance—figuratively of course. If she gave him a shove, she’d be disqualified. But there was one thing she’d learned about men. Cock ruled. If she played her cards right, he’d be hers for a full day.

“Hey, Nick?” She kept her voice at a whisper. 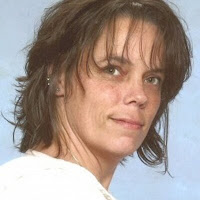 Candi Wall is probably the only person whose real name is more epic than any pseudonym she could have come up with – even as an author! She writes because the voices in her head have to come out somehow. Animal rescue-ess, mother of four, and soccer mom by day, she spends her free time writing – often on napkins at kids’ games because she never knows when a juicy story will reveal its delicious self. She once wrote a sex scene at a wrestling meet. Shhhhhh!

You can find her on:

a Rafflecopter giveaway
The tour dates can be found here