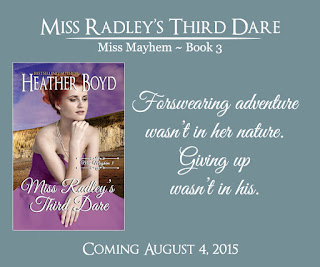 What a woman wants… The only person who ever understood what Julia Radley wanted most in life was the man who ruined her reputation and secured her victory in a bold swimming race. She does not hold Valentine Merton accountable for the harsh criticisms made against her character until he suggests the only way to smooth over the scandal of his defeat is to wed as soon as possible. … the gentleman must dare. After picking himself up after proposing, Valentine Merton is even more determined to tame the wild girl next door. The future he wants within the clockmaker’s guild depends on their speedy marriage. A few sweet words or, as a last resort, another brazen dare is sure to persuade her to take a chance on him… and his family.


There is nothing like having a past to shake up a happy present.

Julia Radley flopped onto her bed and groaned into her pillow. The concept of being so grievously ruined because of her harmless little dare three months ago had not truly occurred to her at the time Valentine Merton had accepted the challenge. She had thought any scandal would have blown over soon after the event that proved her an equal to a man when it came to swimming fast. To her dismay, all these months later, she had become a target of her brother’s unending fury and society’s scorn.

She had to escape.

“Don’t you dare walk away from me, young lady,” Linus, her brother and constant pain in her side, bellowed as he followed into her bedchamber to continue delivering his latest assessments of her predicament from the doorway. “You have no idea what strain this places upon me. What this has done to me. And—”

“What have I done to you?” She sat up, blowing a lock of red hair from her eyes. “All I have done is determined that I can swim faster than one man. Just one member of the male gender to prove my point that women possess more skills than merely wielding a needle. I did not parade myself around in my undergarments for the benefit of the masses. The entire event took no more than half an hour and you act like it is such a long-lasting disaster. You were there. You saw everything and said nothing at the time.”

“How could I have stopped you when I was the last to know my sister had been conspiring with a neighbor behind my back?” Linus turned an unhealthy shade of puce when he referred to her opponent, Valentine Merton. Once he’d called the man his best friend, but no more. Not since the race had they been seen together. “Everyone tried to prevent the race. If you were a lady in any shape or form, no one in Brighton would have any idea of what you look like underneath that gown. As it is—”

A loud knock pounded on the door one floor below them and Linus glanced over his shoulder swiftly.

At last, a caller had come to distract Linus from his daily lecture before he really got going. She held her breath as her brother turned on his heel and marched downstairs without another word.

Bestselling historical author Heather Boyd believes every character she creates deserves their own happily-ever-after, no matter how much trouble she puts them through. With that goal in mind, she writes sizzling regency romance stories that skirt the boundaries of propriety to keep readers enthralled until the wee hours of the morning. Heather has published over twenty novels and shorter works. Catch her latest news www.heather-boyd.com. She lives north of Sydney, Australia, and does her best to wrangle her testosterone-fuelled family (including cat Morpheus) into submission.