What group did you hang out with in high school?
NM: I tended to be rather solitary. When I did hang out with a particular group, it was either the nerds/geeks or the goths/stoners. I’m not sure I fit properly with either, but I found them all interesting. Socializing was always less compelling than people watching to gather fodder for my books. The majority of my true friends came into my life after high school.

What are you passionate about these days?

NM: My writing, as always, is still a primary passion in my life. I am, unfortunately for my work, also quite passionate about video games. I love a good RPG, mostly because I love having the opportunity to play in the stories of others in such an interactive way. Several injuries have limited some of my other passions, such as horseback riding, kayaking, and cave exploration; though I hope to spend more time doing those things again soon.

If you had to do your journey to getting published all over again, what would you do differently?
NM: I think the only thing I really wish I had done differently is taking my writing seriously earlier in my life. I treated it like a hobby for years, even though it was the only career I ever wanted. I feel as if I might have been in a better position coming into the eBook revolution than I am now if I had focused on it back then, but I have also improved significantly in my writing over the years, so it might also be better that I waited.

Ebook or print? And why?

NM: Both. I love eBooks because that format is so accessible to people and is the most popular medium these days. I will probably always have print available, however, because I love being able to have a copy of my books on my shelves and because it is so much fun to do public signings where I can actually meet people who are interested in what I do.

What is your favorite scene in this book?

NM: There are several scenes I love, but the first to come to mind is one of the ones I most enjoyed writing. The scene is in the last third of the book when Indigo has a chance to save Yiloch from an assassination attempt, but she must risk exposing her greatest secret to do so. When…oh wait. No spoilers.

Ascard power can strengthen, heal and create. It also has great potential to destroy, enough to topple entire governments. Indigo’s country places strict limitations on the use of ascard so she must channel her talents into the healing arts or risk severe punishment. An orphan from a disgraced family, trapped by her father’s treason, Indigo struggles to reclaim her place in a society that has driven her into an abusive engagement.

Then a mysterious stranger from a neighboring country contacts her using ascard. He needs help escaping his prison so he can bring an end to his emperor's oppressive rule or die trying. His unshakable devotion to his cause and the passion hidden behind his cool arrogance move her to help him at the risk of being branded a traitor herself.

When the politics of society bring them together a second time, Indigo decides to use her growing powers to help him fight his war. If only she dared fight for her own future with such passion. Perhaps she can find the courage to do so by helping the man she has fallen for win his revolution. She might have exactly the power he needs to succeed.

Indigo stared at the place Eldrian had been seconds ago. With him there, even the beasts couldn’t drive her away. With him gone, icy fingers of dread crept up her spine. She wanted to be anywhere else. In scant seconds, everything changed and all she had left of him were memories and a pair of boots.

Looking at the oversized boots, she grinned. Though she barely knew him, something about him fit her. His arms felt like home more than any place she had ever been. Jayce would be a poor substitute for this exotic man who made her feel so wanted and alive. Such was the price she would pay for her father’s treason.

She stepped closer to the pillars, pulse racing, but the shimmer was gone. He was gone and she couldn’t follow. In that instant, she would abandon everything to go after him. Placing a hand on either side of one pillar, she closed her eyes and pressed her forehead against rough gray stone. If only…

The sound of movement behind her shattered her musings like so much fragile glass. Her heart bounded into her throat. She spun. A hound ambled into the canyon. She looked into its sightless eyes and recognized death in them. 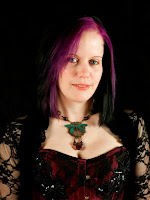 Nikki started writing her first novel at the age of 12 (which is still tucked away in a briefcase in her office). Despite a successful short story publication with Cricket Magazine in 2007, she treated her writing addiction as a hobby until a drop in the economy left her with an abundance of free time to focus on making it her career.

Nikki lives in the magnificent Pacific Northwest tending to her awesome husband, two sweet horses, three manipulative cats, and a crazy dog. She’s a wine and tea fanatic who loves sitting on the ocean in her kayak surrounded by open water or hanging from a rope in a cave, embraced by darkness and the sound of dripping water. She also enjoys horseback riding, archery, PC gaming, dancing, good anime, etc. She studies Japanese and practices Iaido because she believes we should never stop learning.