I am delighted to share a guest post by author Tamsen Schultz, who gives us a chance to armchair travel as she shares her answer to...
What would be your dream place to visit and why?

When The Reading Addict signed up for my blog tour and provided a list of suggested topics in case we didn’t have a topic in mind (and by the way, I am eternally grateful for those suggestions), I promptly ix-nayed all the topics on writing and picked travel because, well, TRAVEL!

I love to travel. I’d probably travel nine months out of the year if I could (the other three would be dedicated to Halloween, Thanksgiving, and Christmas at home). But alas, life does not permit this given that I have to earn a living somehow, and I have kids that need to get to school on occasion, and a husband I kind of like spending time with. But the good news is, that’s what books are for! I can travel whenever I want. And not only can I travel to places I want to visit, I can also travel to a different time! Books are amazing. Really, you probably already know that if you are reading this blog, but it bears repeating. Often.

But the question wasn’t what fictional place I’d like to visit, but my dream place (which, if we’re being literal, could be a fictional place too, but I’ll stick with a real place for the purposes of this blog so as not to be overwhelmed by the options). I’ll be honest, my dream place changes every day. Sometimes it’s a beach in the Seychelles like this one: 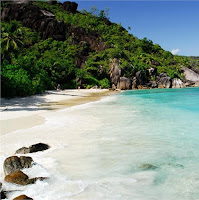 Sometime it’s the beautiful mountains, like here in Yosemite: 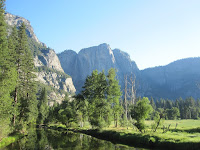 But if I had to pick one place, it would be my soul-city, Rome. I can’t describe how much I love the city of Rome…Maybe a writer like Marquez could, but I’m always at a bit of a loss. Or maybe it’s because the way I feel when I’m in Rome isn’t something I want to put to words because the feeling is so entrenched in my being? Or maybe I’m a little like Heisenberg’s uncertainty principle in that manner, I can write about Rome or I can feel Rome, I can’t accurately do both at the same time.

Anyway, why do I love Rome? How the history blends with the modern is part of it. I like walking the streets and wondering who else has walked these routes over the past several thousand years. Did emperors? Or maybe it was just the Roman equivalent of Jane Doe, caught up in her own life, thinking of her own children, her own home, rushing from shop to shop over the same cobblestones I walk down.

As a lover of mysteries, Rome also has a little bit of an edgy darkness to it. Generations of murder, betrayal, lies, and scandal lurk in the streets and buildings in Rome. That it’s a visually stunningly beautiful city only adds to the attraction, or perhaps I should say allure.

But then it also has fits of whimsy. There is a house with monsters carved around sills so that the doors and windows look like tongues. And there there is this building near Circus Maximus:]

The windows are almost a little Alice in Wonderland-ish but then there is the hand, with a single finger pointing upward, in the middle. I seriously have NO idea what that is supposed to mean or signify.

I also like that the have churches like we have Starbucks – only way more interesting because they are hundreds of years old and are decorated by people like Caravaggio, Bellini, Rubens, Chiari, Puccini, Bernini, and, of course, Michelangelo (to name like .01% of the artists represented in the countless churches). Here’s one of my favorite church-spottings in Piazza del Popolo: 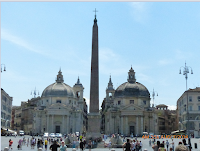 So those a few reasons why Rome is my dream place. Someday, I’ll live here for a year or two—maybe when the kids head off to college. But in the meantime, here’s a shot of me, dreaming over my soul city from a trip we took last year.


The Frailty of Things

Independence. Kit Forrester is a woman who wears her independence like armor. Despite keeping secrets and hiding her past, she’s built a life she loves and is accountable to no one. Until, that is, one of the world’s most wanted war criminals sets his sights on her and she must weigh the risk to one against the chance of justice and closure for many—a decision Kit couldn't make on her own even if she wanted to.

Certainty. As a man who makes his living in the shadows of governments and wars, certainty isn’t a part of Garret Cantona’s vocabulary, and he’s just fine with that. But when Kit walks into his life, he realizes he’s never before been so sure about anything or anyone. Suddenly, he finds he’s looking at the world, his world, in a different light. And now that he is, he’s determined to protect it, and her, in whatever ways he can.

Frailty. No one knows better than Kit and Garret that an appreciation for what is, or what was, or what might be, can be born from the uncertainty and fragility of life. But when a hunt for a killer leaves Garret no choice but to throw Kit back into her broken and damaged past, even his unshakable faith in what they have together might not be enough to keep it from shattering into a million pieces.


Garret took a step back and crossed his arms over his chest. “This was your idea, wasn’t it? You talked to Drew?” he asked, a pit gnawing its way through his stomach.

Slowly, she inclined her head.

He locked his jaw to keep from yelling in frustration. Yes, he was upset that she and Drew had worked up this scheme without him, but what caused him even more irritation was the fact that the reality of their situation had just come crashing back down on him and the whole thing, truth be told, terrified him.

He turned toward the wood stove and knelt to add some firewood, just to give himself something to do.

“You’re angry,” Kit said, her voice soft behind him. She hadn’t moved, and for that he was grateful.

After a long moment of silence, during which he shoved a few logs into the burning stove, he let out a deep breath and answered. “At the situation, Kit,” he said, watching the fire dance around the logs, their orange and blue flames licking the new wood as if testing its suitability.

“I am too, Garret. That’s why I suggested the book signing to Drew. I want—no, I need this to end.”

And then he heard it. He heard all the stress in her voice, all the fear and anxiety that he’d recognized and dismissed as they’d been holed up in their cozy little cabin for the past five days. He couldn’t ignore it now, he couldn’t dismiss it and turn their attention to more interesting and diverting pursuits the way he’d been doing. He couldn’t try to make this better for her by forcing it under the rug.

Tamsen Schultz is the author of several romantic suspense novels and American Kin (a short story published in Line Zero Magazine). In addition to being a writer, she has a background in the field of international conflict resolution, has co-founded a non-profit, and currently works in corporate America. Like most lawyers, she spends a disproportionate amount of time thinking (and writing) about what it might be like to do something else. She lives in Northern California in a house full of males including her husband, two sons, four cats, a dog, and a gender-neutral, but well-stocked, wine rack.