Surrender My Heart
By G.E. Taylor

She was a law unto herself until she met David Alexander… Priscilla is a single mom trying to make a life for herself and her young son. She doesn’t have time for romance, especially not with the handsome, charming man who ran over her dog. From the first frightening moment of their first meeting, David is enchanted with the prickly yet fiercely loyal and loving Priscilla. He can’t get her out of his head, and he doesn’t want to. He sets his sights on the one woman he’d fight hell or high water to love. But will Priscilla surrender her heart to him?

Synopsis:
“Jesus Chr—!” David mutters in disbelief, while swerving to avoid hitting the dog that dashed in front of his truck and the young boy who chased after him. He hears a thump, feels it, and he prays to God it isn’t the child he’d hit. The dog he can fix; he’s a veterinarian. The child was a different story. Kneeling beside the boy and his pet, David breathes a sigh of relief. The child is all right. He turns his focus on the mother, and he knew this encounter would not be his last. Her fiery tongue leaves him with no doubt that he would be held responsible for the accident, and if he’d hurt her son, there’d be no place he would be safe from her wrath. But like a moth, he was drawn to the flame.

Priscilla Bradford has one goal—to build a successful psychotherapy private practice in a short time. There is no room in her life for a relationship. She doesn’t want it. She wants no distractions and no complications. Maintaining an aloof persona, she keeps off would-be admirers. Then she runs into David Alexander, a man she cannot ignore. Despite her best efforts to stay fully committed to her goal, she is drawn to him in a way she cannot explain. That did not sit well with her, being a person who likes to be in control and in charge.

“Don’t open it!” Priscilla’s voice rang out, but it was a second too late.

Tony charged forward, pulling it open. Boxer dashed through before she or her son could stop him to put on his leash.

“Tony, don’t!” Priscilla screamed, running after her six-year-old son. Her frightened heart rushed up to her throat. Praying heavily to God that she got hold of him before he reached the street that was fairly busy in the evenings, she doubled her strides. Tony was learning to check the door first before opening it. Sometimes he forgot. The minute she returned to the house, she would call the electrician to fix the bell. Obviously, there was a short somewhere, since it was ringing spontaneously.

David Alexander glanced quickly at the clock on his dashboard. He’d better hurry, or he would be late to pick up his son from detention. This was becoming a habit with Bryce. Last month, he’d had three detentions. Now this one. Soon—and very soon—the principal would schedule a parent conference. Bryce was skating on thin ice. “Jesus Chr—!” he muttered, swerving to avoid hitting the dog that dashed in front of his truck and the young boy who chased after him. He heard a thump, felt it, and he prayed to God it wasn’t the child he’d hit.

Parking quickly, David pushed his door open and stepped out, hurrying to where the boy and the dog were. Immense relief flowed through him to see that the boy looked all right.

“What were you doing driving so fast on this street?” demanded a voice filled with fright, worry, and anger as she skidded to a stop and immediately fell on her knees beside Tony. With her heart pumping furiously, Priscilla’s eyes swept over Tony quickly. Breathing hard and fast, she continued, “If you’ve hurt my son or killed his dog, you’re in big trouble.” Swiftly, her eyes and hands roamed over Tony. “Honey, Tony, do you hurt anywhere?”

Shaking his head, he said, “No.” His eyes, which were fastened on his dog, never wavered. “But Boxer—” He broke off, and fresh tears ran down his face.

Satisfied that her son sustained no visible injuries and he appeared to be all right, she turned her attention to Boxer.

“May I take a look at him?” David asked the boy gently.

“You stay away from us!” The furious pumping of her heart had not slowed down. Her hand trembled visibly as she reached out to touch Boxer. Swallowing with difficulty, her fingers moved gently over his coat. Boxer didn’t move.

Deciding he couldn’t reason with the mother, David addressed the boy again. “Tony, I’m Dr. Dave. I’m a veterinarian, and I work with animals,” he said, his eyes holding the boy’s while he ignored his mother for the moment. His priority was the boy and the animal. Hopefully, he could deal with the mother later. “May I?” 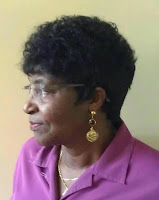 I became hooked on reading romance novels during my teen years and my attempt at writing began in high school. All of my manuscripts were mailed under my bed. Eventually, I threw out most of them. That was painful especially since I’d written them by longhand first, then typed them on my old, dependable typewriter.
In college I majored in English but ended up with a Master in Social Work from Rutgers University and a Master in Education from Seton Hall University. Though I had these different career paths, I never gave up my passion for writing or my need to read.  Now I’m more committed to my writing.
I live in New Jersey with my family; enjoy soul music, like dancing and the occasional glass of wine.


Join G.E. Taylor and the Killion Group as we celebrate the release of Surrender My Heart with a Release Day Blast on July 6th. Included in this release day blast is exclusive content, a spotlight of the book, and a giveaway.

One GRAND PRIZE WINNER will receive a SIGNED copy of Desperate Decision!