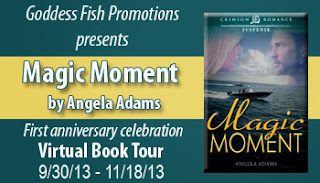 
What makes a good heroine?

Thank you so much for the invitation and being part of “Magic Moment’s First Anniversary Tour.” I look forward to meeting your readers.

When I first started reading romance novels, back in my high school days, the stereotypical heroine was beautiful, shapely and stood up to the hero who came to rescue her from whatever predicament tossed them together.

I can only speak for myself when I was putting together the character of Laura Roberts. I wanted her to be strong yet not so strong that she didn’t need Chase Donovan. I tried showing that character trait in Laura when Chase left her (and she was pregnant). Yes, she loved him and wanted them to be together. But, if he wanted to leave, then as far as Laura was concerned, that was his choice and she’d make a life without him.

On the other hand, when Chase had seen the error of his ways and returned to her, she was willing to listen. She tried to see the situation from his point of view. She was forgiving without being a doormat and falling right into his arms.

Readers, what’s your opinion?  What do you think makes a good heroine?

When the FBI brings Laura Roberts - a quiet, reserved bookkeeper - in for questioning regarding activities at the warehouse where she works, an uneasy Laura resigns her job - only to be attacked by thugs.

Chase Donovan intends to spend a few peaceful days on his boat getting his head together - and finds a woman being assaulted by two men who say his father told them to do it.

Chase doesn’t want to believe his father could hurt anyone. Laura doesn’t understand why she’s a target. Can they learn to work together to discover the truth - before someone dies?

Laura contemplates the day that finds her married to Chase, her feelings for the man who is now her husband, and the thought of being pregnant.

The day’s events seemed surreal. A quick wedding ceremony, a leisurely lunch, including slices of vanilla cake substituting as wedding cake, followed by a peaceful stroll along the bay, Laura hadn’t had a minute to second-guess their actions. She had never been so content.

Later, in the darkened cabin, Chase lay across her. The man was wearing them out, and if she didn’t find herself pregnant quickly, they would literally copulate themselves to death. The image shook her body with a giggle. Without disrupting his snooze, Chase eased off her length. Laura snuggled up against his side and he turned toward her, his chin brushing the top of her head. She gazed at her husband’s left hand, resting comfortably on her breast, a gold band on his third finger. That morning in the jewelry store, she had been astonished by his genuine desire for her ring’s mate.

She pressed his open palm to her bare belly. On their way to the courthouse, they had stopped at an ATM and Chase noted their wedding date on his receipt. In the courthouse ladies’ room, Laura had rummaged through her purse, finding the small calendar she carried. Forget that she had missed lunch the previous day with Kate—she would email her friend regrets from Chase’s laptop—Laura had always kept track of that dreaded twenty-eighth day every month so she could curtail her caffeine intake. As she had stared at the date with the red felt-pen circle, she counted backwards.

Angela Adams writes and reviews contemporary romances. Her work has appeared in Romance at Heart, Oysters and Chocolate, and Long and Short Reviews. In December 2011, Whimsical Publications published an anthology, Winter Wonders. Ms. Adams’ short story “Burgers and Hot Chocolate,” was among the collection.

Angela will award a $25 BN or Starbucks GC to one randomly drawn commenter during the tour.  Please leave a comment with a valid e-mail address about what you look for in a heroine and a book that has one of your favorite heroines.  Increase your entries by visiting other tour stops, a list is available at this link.