The Hoop Kid from Elmdale Park, by Teko Bernard, is written to delight and challenge middle schoolers, ages 8 - 13.

Blurb:  All Bernard Jones wanted to do while staying with his grandparents for the summer in Elmdale, his father’s childhood hometown, was work on his basketball skills. When Bernard excitedly enters a team into the Annual Elmdale Park Basketball Tournament, he’s shocked to discover that the future of the park is at stake. The town of Elmdale hasn’t won the tournament in 20 years, and Victor Franco, a ruthless millionaire, is planning to shut down the annual tournament for good so that he can turn the historic Elmdale Park into a landfill for his own profit. It can all be stopped if Bernard and his team, the Elmdale Warriors, win the tournament this year. Can the courageous Bernard and his fun and wacky crew defeat their Oakdale rivals and save the historic Park?

This was such an enjoyable read! I love the nice, upbeat story, the realistic characters, and the fantastic humor. Bernard is such a relatable character, and he’s a great true-to-life role model. Readers are sure to appreciate the basketball lingo, his love of the game, and his determination to fight the good fight. - KIRKUS Reviews 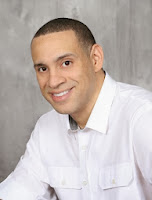 For over a decade Teko Bernard worked as a creative director and graphic designer in the sportswear and sports events industries where he developed brand identities, marketing communications and apparel graphics for nationally recognized brands and events like ESPN, X Games, NCAA and the BCS. After an exciting career in the sportswear and sports event market, Teko set out to pursue his lifelong dream of creating the original kid’s entertainment brand and cartoon property that is Elmdale Park. Elmdale Park currently produces a unique brand of middle grade chapter books & activewear. The Hoop Kid from Elmdale Park is the debut book from the brand. Teko lives and operates the company from Overland Park, KS, and collaborates with a team of seasoned writers, illustrators, editors and designers who all share the same passion for kids books, cartoons, sports and outdoor recreation. When he’s not designing or developing new story concepts for Elmdale Park, Teko is usually reading, listening to music, enjoying the outdoors or being an amateur movie critic.

The Hoop Kid from Elmdale Park
by Teko Bernard and Wayne L. Wilson and illustrated by Gabriel Diaz

This delightful children's book is an uplifting tale of a dedicated young man named Bernard Jones with a love for basketball and his very unique basketball, G5000.  His skills come in handy when he visits his father's hometown and has to find a way to combat the ruthless man who wants to destroy the community park and convert it into a profitable landfill.  A pivotal tournament will pit Bernard and the friends he manages to recruit against the Oakdale champions who are used to ruling the court.  The question is whether the winner will be determined by skill or guile.

A fun fast-paced read that provides a great cast of characters who each have a different quirk and skill-set.  This was a nice combination of fantasy and reality and I loved the characterization of Bernard's coach.  The actions of one of Bernard's biggest rivals was a little surprising but the excitement of a hard-fought basketball game and the importance of strategy and determination is delightfully conveyed.  Hopefully there will be more of these entertaining stories.

One lucky winner will win an e-book version of this fun read.  Please leave a comment on what you enjoyed the most about your middle school experience along with a valid e-mail address.  Winner will be chosen after Dec. 7, 2013 using Random.org