Once Upon a Masquerade (Feature, review and GIVEAWAY!) 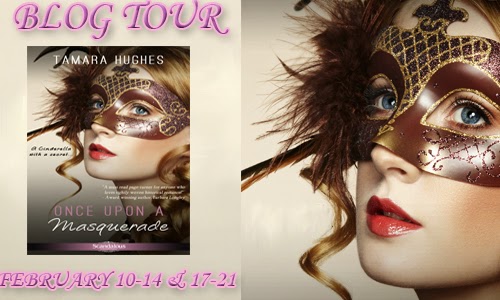 Once Upon a Masquerade (Entangled Scandalous)

A Prince Charming meets his match… Self-made shipping magnate Christopher Black first spies Rebecca Bailey at a masquerade ball and is captivated by her refreshing naiveté and sparkling beauty. She’s a stark contrast to the hollow behavior of the ton and the guile of his former fiancée, but the closer he gets to her secrets, the further she pushes him away.   A Cinderella with a secret… Rebecca is drawn to the charismatic Christopher from the first, but she cannot risk him discovering that she is really a housemaid impersonating an heiress. Her father's life depends on it.    A Happily Ever After that could never be… When Christopher’s investigation of the murder of his best friend leads him straight to Rebecca, he fears his ingénue may be a femme fatale in disguise.  Now he must decide if he can trust the woman he's come to love, or if her secrets will be his downfall.

A small town girl with a big imagination, Tamara Hughes had no idea what to do with her life. After graduating from college, she moved to a big city, started a family and a job, and still struggled to find that creative outlet she craved. An avid reader of romance, she gave writing a try and became hooked on the power of exploring characters, envisioning adventures, and creating worlds. She enjoys stories with interesting twists and heroines who have the grit to surmount any obstacle, all without losing the ability to laugh. To learn more, stop by her website: www.tamarahughes.com. You can also find her on:


Giveaway Details:
1 $25 Amazon Gift Card US Only
3 eBooks of ONCE UPON A MASQUERADE International
Rafflecopter Code:
a Rafflecopter giveaway

Once Upon a Masquerade

by Tamara Hughes is an entertaining historical romance that combines a mystery with the tale of the challenges facing a dutiful daughter, Rebecca Bailey, who is desperate to save her father from his own downward spiral which has resulted in a threat to his life.  Christopher Black is determined to discover who murdered his friend but he becomes embroiled in a different situation when the mysterious woman he meets at a masquerade captures his attention and his affection.  Can a successful ship’s captain who has been hurt in the past find a way to forgive a woman who has been less than truthful to him?  Better yet, can she remain alive long enough to convince him of her true affections for him?

This is a fun peek into high society in New York during the era of the Astors as the nouveau riche and the established wealthy jockey for acceptance and position.  The class distinctions persist as those in service have to deal with the vagaries of their employers and the difficulty of escaping from a vicious cycle of gambling debt is highlighted.  I enjoyed the intriguing glimpse of the past although I was less than convinced of the flowering of the relationship between the main characters since they seem to have such an erratic attraction to each other.  There are charismatic secondary characters who enhance the story and it will be interesting to see if further tales are presented which involve Christopher using his detective skills to solve other mysteries in this milieu.  An enjoyable light read.

Email ThisBlogThis!Share to TwitterShare to FacebookShare to Pinterest
Labels: Entangled Scandalous, Once Upon a Masquerade, Tamara Hughes