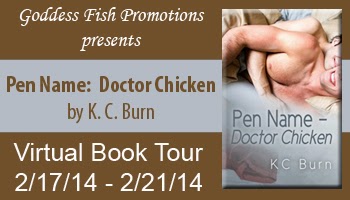 I am delighted to have a guest post by the author of the ADULT m/m title, Pen Name - Doctor Chicken

(and I love the two titles I have read from her 'Toronto' series, Cop Out

My reviews for those are at this link and this one.


For Vinnie and Stratford, food figures very prominently in their relationship. After all, they meet at a cooking class, and there are a number of significant events and milestones that revolve around food in Pen Name – Doctor Chicken.

The cooking class is a little bit of me. In another life, I think I could have been a chef. I do like to cook, I like to experiment, and heaven knows I love to eat. However, I absolutely hate cleaning up after cooking, and given the demands on my time between writing and the day job, I’m not interested in making things that are too complicated or that are time-consuming to prepare.  Maybe one day, when I can afford little gremlins to clean up after my cooking experiments, I’ll get into more gourmet cooking. But for now, it’s all about simplicity and ease.

With that in mind, I’ve got a little recipe for you! It’s fast, easy, and tasty, although I bet it isn’t one that Vinnie and Stratford got in their cooking class. But it is certainly simple enough that even Stratford could make it without damaging himself or others. I make it all the time for parties.

Mix cream cheese, onion, paprika, mustard, and hot sauce together.  Mix in cheddar. Divide in 2 and shape into balls. If desired, garnish with parsley and chopped walnuts. Serve with assorted crackers and celery sticks. Tastes even better if you refrigerate for a day before serving.

So tell me, what’s your favourite thing to cook/bake? And it’s okay if it’s take out ; )

Sometimes Stratford Dale feels like Doctor Chicken consumes his life. It’s his pen name for a series of wildly popular children’s books. They were his brainchild; he meant for them to be a way to pay his many bills while he pursued his dream of publishing graphic novels. But the Doctor Chicken contract was a raw deal. Instead, he churns out book after book for a pittance, leaving him broke and no closer to his dreams.

Stratford’s dreams of love have fared no better, but he’s still trying. After yet another disastrous date, he’s intrigued by a man going into a cooking class—so he takes the class too. Vinnie Giani is a successful, self-made man who is charmed by Stratford’s bow ties, sharp humor, and clumsiness—which leads to an opportunity to take Stratford in for stitches. Vinnie is, above all, responsible, having taken on the care of his mother and sisters from a young age. Perhaps it’s natural when he begins to treat Stratford more as a child who needs a parent than as an equal partner. But when Vinnie tries to “fix” Stratford’s career woes—including the Doctor Chicken problem—and ends up making the situation worse, their fledgling relationship may not withstand the the strain created by blame and lies.

Stratford should have waited until he’d gotten home to call Abby, because the wind was going to freeze his fingers into a permanent curl around his phone. Gloves, scarfs, and wind-resistant fabrics hadn’t suited his super-sexy Barry-bait outfit. Unfortunately, the Barry bait had been too enticing. Or the wrong kind of enticing. Sluts might wear shirts and pants as tight as his, but they didn’t wear bow ties, did they? At least he was able to grab a latte on the way home. Aside from being one of his few expensive indulgences, it was keeping his left hand warmish.

“Of course you will. Are you sure you’re not judging him too harshly? You sometimes have unrealistic expectations.”

He snorted. No one had to know he’d had a sneaking little thought that he’d so dazzle Barry with his erudition and joie de vivre that the man would immediately become smitten and fall in love. Besides, Abby already knew he was a hopeless romantic.

An older man in a fedora, walking in the opposite direction, gave Stratford a raised-brow look, and Stratford simply rolled his eyes and shrugged.

“What, oh, yes. Sorry.” Stratford had to stop drifting to his fantasies of a fairytale ending.

This time it was Abby who snorted. “Blew you a little bit? Kind of like being a little bit preggers, you know.”

“It’s never a good sign when you have to say ‘watch the teeth,’ followed closely by ‘don’t bite that.’ Puts a damper on things.”

“You think?” Loud gales of laughter buffeted him across the wireless waves, and Stratford pursed his lips. Why was his dating life such a fucking joke?

KC Burn has been writing for as long as she can remember and is a sucker for happy endings (of all kinds). After moving from Toronto to Florida for her husband to take a dream job, she discovered a love of gay romance and fulfilled a dream of her own – getting published. After a few years of editing web content by day, and neglecting her supportive, understanding hubby and needy cat at night to write stories about men loving men, she was uprooted yet again and now resides in California. Writing is always fun and rewarding, but writing about her guys is the most fun she’s had in a long time, and she hopes you’ll enjoy them as much as she does.

K.C. Burn posed the following question:  So tell me, what’s your favourite thing to cook/bake? And it’s okay if it’s take out ; )

Please enter the rafflecopter and leave your answer in the comments.

Please also follow the tour by visiting these other stops:

I enjoyed the interaction between these two males and the fact that they were both tentative in their approach to dating yet willing to step outside of their comfort zone once they found someone worth fighting for.  The humor and warmth that each display makes this a heartwarming yet lighthearted romance that still addresses serious issues such as exploitation, workplace harassment, and rejection by those who should be part of your support structure.  Being a person who can trip over my own feet, I sympathize with poor Stratford’s mishaps and I thought that both of these guys are people who I would love to have as friends and felt that the author did a great job of creating an entertaining story but, I think the major conflict was forced and the end was less than satisfactory and abrupt and I would have preferred a more detailed resolution so I really hope there is another story that will pick up where this one ends.